The ozone hole presents a compelling, simple narrative. We need more of these 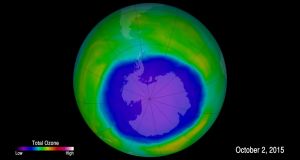 The hole in the ozone layer over Antarctica on October 2nd, 2015, which appears to be healing. Photograph: Nasa/Goddard Space Flight Center/PA Wire

The words “ozone hole” dominate my earliest memories of climate change. I was in primary school when scientists announced they had discovered a hole in the ozone layer over Antarctica. Two years later, in 1987, an international agreement called the Montreal Protocol banned many chlorofluorocarbons or CFCs, starting in 1989. I distinctly remember this as the first time I realised people were probably wrecking the planet.

As I layered on summer sunscreen, I imagined the poor citizens of Australia in a state of constant peril from an angry sun with no ozone to protect them. Styrofoam, made using CFCs, began to disappear from my life. Styrofoam peanuts were replaced as ubiquitous packing materials and McDonald’s burgers no longer came in Styrofoam boxes. My family viewed aerosols with suspicion and drastically cut back on purchases even after companies began to remove CFCs.

Ozone has faded a little from the news but it is a success story. The ozone hole reached its largest size, according to Nasa, in 1994. Nasa now expects the ozone over Antarctica to return to the level that it was before 1980. This change is predicted to occur by 2070. Unfortunately, an intact ozone layer may exacerbate the effects of global warming by sealing in heat produced through greenhouse gas emissions, but that is a story for another column.

Scientists have been familiar with ozone for centuries as a smell detected during lightning storms. During the 19th century, the smell was noted during electrolysis or the process by which an electrical current is used to separate water into hydrogen and oxygen. Ozone in the troposphere (or the air that we breathe) can be a byproduct of industrial production and is generally bad news for life. However, ozone in the stratosphere forms a layer that deflects some of the sun’s radiation and protects us from its damaging effects.

The announcement of the ozone hole captured imaginations and resulted in effective action in ways that scientists and activists interested in controlling greenhouse gas emissions can only envy. But why should this be the case?

In fact my memory is not very good, and the timeline I presented above is not fully accurate. The gaps in my memory point to one of the reasons why CFC regulation was successful. According to the lawyer Chris Peloso, American consumers had been aware of the hazards of CFCs for over a decade by the time the Montreal Protocol came into effect and had already significantly cut back on consumption.

I also remembered the link between ozone depletion and CFCs as an undisputed fact. By contrast, Reiner Grundmunn wrote in Science, Technology & Human Values, the scientific consensus around CFCs was slow to form and less complete than the consensus around greenhouse gas emissions.

But my American-centric perspective also reveals other differences between CFC regulation and greenhouse gas emissions. For example, greenhouse gases are a truly global problem, unlike CFCs, which were produced and consumed in a relatively small number of (rich) countries. Further, Grundmann argued leadership shown by the US on the question of CFCs has not been replicated around greenhouse gases and is crucial to a working global agreement to tackle climate change.

There is one more reason that I think the ozone hole may be a success story. Without even understanding the chemistry that allows CFCs to deplete ozone, the idea of a hole in the protective layer of the atmosphere is relatively simple to grasp. Nasa helped by producing beautifully simple visualisations of the ozone hole. The idea of the ozone hole was compellingly linked to the phenomenon of sunburn and skin cancer: tangible effects on people’s individual bodies.

The ozone hole presents a compelling narrative. The relatively simple act of avoiding products containing CFCs led to the direct reduction of an understood threat. We can “see” the ozone hole recover on Nasa’s maps. If we are going to make progress on the other challenges of global climate change, we need more of these narratives to help people bridge the gap between an easy action and a tangible effect.