Solar Orbiter to shed new light on the sun 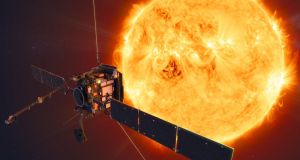 Graphic representation of the Solar Orbiter in flight. Two Irish companies, Enbio and Captec, between them won €3.1 million in industrial contracts for Orbiter

The sun makes life on Earth possible but, despite this life-sustaining role, scientists know surprisingly little about our nearest star. The €1.35 billion Solar Orbiter – a joint European Space Agency and Nasa mission – is due to launch from Cape Canaveral shortly, with a very significant Irish input, and plans to change all that.

One mystery Orbiter scientists will seek to answer is why the surface temperature of the sun is 5,500 degrees, while the temperature of its enveloping corona – the layer of blistering, hot plasma gas that begins about 2,000km off the solar surface and extends for millions of kilometres into space – is thought to be 2 million degrees.

That’s not the only question that scientists will be seeking answers to. There is also the question of how the solar wind from the sun is produced. This wind is a stream of electrically-charged particles spat out from the upper atmosphere of the sun. The particles hurtle across space, and slam into Earth’s atmosphere causing a number of notable effects, including the northern and southern lights.

Prof Peter Gallagher, head of astrophysics at the Dublin Institute for Advanced Studies, is co-investigator on the Solar Telescope Imaging X-Rays (Stix) instrument. This is one of six scientific instruments which will observe the sun and send imagery to Earth. Four other instruments will measure the solar wind including electrical and magnetic fields associated with it.

“It will fly past Venus, fly past Mercury and go into the inner solar system,” says Gallagher, who formerly worked at Nasa and Trinity College Dublin.

“It will have cameras that are going to take photographs or images of the sun and also it will have these in-situ detectors that will basically ‘taste’ the solar wind as it goes past.

There is another solar probe that is being deployed by Nasa. It’s expected that two solar probes jointly observing the sun will revolutionise solar science.

“Nasa launched a spacecraft about two years ago called the Parker Solar Probe – so we will have two spacecraft in the inner solar system,” Gallagher says. “Parker will be even closer, but it doesn’t have the cameras. It is making measurements as it flies through the solar wind, whereas we will be taking images. The combination of the two is really going to transform our view of the Sun and the way it interacts with the whole solar system.”

Two Irish companies, Enbio and Captec, between them won €3.1 million in industrial contracts for Orbiter. Enbio is based at Dublin City University’s Alpha Innovation Campus and Captec in Malahide, Co Dublin.

Orbiter will go three-quarters of the way to the Sun, and within 43 millionkm of the solar surface, where it could be subject to temperatures of 500 degrees. The spacecraft and its instruments need an effective heat shield to survive such conditions, and it had to be light. ESA needed to find a new material.

This is where Enbio came in. It began began life in 2006 with a technology that put synthetic bone on to metal implants for the healthcare sector. The technology used grit to blast off the oxide layers on the surface of metals such as titanium, and allowing another material to replace that layer.

“It started out as an orthopaedic business where we were trying to coat hips, knees, dental implants – anything that needed to be fixed in the skeleton for orthopaedic purposes to get better fixation,” says chief executive John O’Donoghue.

“We went to ESA and immediately they were interested in our material, but they didn’t know for what. They were having difficulty with the thermal protection for their solar orbiter. They were struggling to find something to protect the heat shield and not add weight.”

Enbio had the surface coating technology, but needed a new, light material that could be coated on to the heat shield. O’Donoghue came up with an idea.

“Having been interested in all the prehistoric art that had gone on I knew that charred bone was used as well as charcoal in cave paintings by prehistoric man,” he says.

To test his idea he needed to source some crushed bone. “I found a company called Ebonex in America,” recalls O’Donoghue. “They had done work with Nasa on one of the Voyager missions and they knew what we were trying to do. We got some of their powder – and it worked first time.”

Enbio now had the technology and the right material to solve the heat shield problem. “We quickly became ‘mission critical’”, he says.

Another critical part of Orbiter mission, as with any space mission, is its software. Individual instruments on board Orbiter have their own software. These must be checked to ensure they meet the mission’s requirements, and all the software must be rigorously tested so it all works together seamlessly.

On Orbiter, this is the job of Captec. The family-owned company has been involved in many high-profile, recent space missions including the Rosetta mission that landed on a comet in 2014; the BepiColombo mission to Mercury in 2018 and the European Juice mission to Jupiter’s moons in 2017.

“We are independent checkers of all the on-board software,” says Richard Cluff, project manager of Captec’s Solar Orbiter work. Cluff says his team checks “all the software on board that manages communication with ground or controls all the thrusters and actuators on board to keep the spacecraft the right way up, and controls all the instruments – and all the thermal systems”.

“There are seven or eight different software packages on board that run these different systems,” says Cluff. “We report problems with specifications and find problems and inconsistencies or things missing or that don’t match up with what is needed.”

The Irish involvement in the Orbiter mission is something of a coup for the small but active space industry here, and a once-in-a-lifetime chance for the solar scientists that are involved to get a chance to study the Sun close up.

“Irish research and innovation have played a vital role in the development of the Solar Orbiter,” says Gallagher. “It is a testament to the calibre of researchers working in Ireland that we have such strong Irish involvement in this project.”

Gallagher began studying the sun in 1995, adding that Orbiter was a “once in a lifetime” opportunity for solar physicists. That’s because it might find answers to puzzling questions such as why the atmosphere of the sun is hotter than its surface – apparently breaking the usual rules of science.

“As you move away from the surface of the sun it gets hotter,” says Gallagher. “It’s weird. This is the most embarrassing question in solar physics and the most challenging question.”

Gallagher says he will be very nervous when watching the launch of Orbiter. “My group alone has been working on this for 10 years. Enterprise Ireland and ESA have provided us with about €900,000. If it blows up all of that is gone.”

The launch of Solar Orbiter (scheduled for Monday, February 10th at 4:03am Irish time) can be watched live via EST television at esa.int/esatv