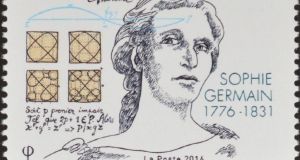 A French stamp issued to commemorate the work of Sophie Germain

When a guitar string is plucked, we don’t see waves travelling along the string. This is because the ends are fixed. Instead, we see a standing-wave pattern. Standing waves are also found on drum-heads and on the sound-boxes of violins. The shape of a violin strongly affects the quality and purity of the sound, as it determines the mixture of standing wave harmonics that it can sustain.

Joseph Fourier showed how complex wave patterns can be broken down into fundamental components called sine waves. Before this, scientists struggled to explain oscillating systems.

In the late 18th century, before Fourier’s breakthrough, a German physicist called Ernst Chladni devised a clever way to visualise vibrations. When he drew a bow across the edge of a metal plate fixed at its centre, the bow induced standing waves in the plate, which emitted a musical sound.

When Chladni sprinkled fine sand on the plate, the grains bounced away from the parts that were oscillating strongly and gathered where there was least vibration. The curves on the plate that do not oscillate are the nodal lines, and the pattern formed is called a Chladni figure.

In 1808, Chladni demonstrated his vibrating plates at the Academy of Science in Paris. Napoleon, who was in attendance, proposed a prize for any scientist who could provide a mathematical explanation of Chladni’s patterns. As Fourier’s wave theory was just emerging, the theoretical apparatus to solve the problem had not yet been developed and the leading savants – Lagrange, Laplace and others – felt that it was beyond reach, but a solution came from a very unexpected source.

Sophie Germain, a daughter of wealthy parents, was captivated by mathematics when she read a book in her father’s library of the life and death of Archimedes.

Her parents discouraged her interest, but she was smitten and continued secretly to study mathematics. Women had no access to university but, using the name of a former student, Monsieur LeBlanc, she managed to obtain from the École Polytechnique the lecture notes of the great Lagrange.

Germain submitted work to the Academy of Science under the name of LeBlanc, of such excellence that it peaked the interest of Lagrange. Far from being angry when he learned her true identity, Lagrange supported her continuing research, acting as her mentor. She had an early triumph when she proved a special case of Fermat’s Last Theorem, a problem not fully resolved until 1994.

Following correspondence with Carl Friedrich Gauss, M LeBlanc was again unmasked and, again, the response was generous and supportive. At a later stage, Gauss described Germain as having “the most noble courage, extraordinary talent and superior genius”.

There is no doubt that she had abundant ability, but she never reached her full potential, due to her haphazard education. She lacked the rigorous training essential for a leading mathematician, which was available only to men.

When Germain heard of Napoleon’s challenge, she decided to seek a mathematical theory for Chladni’s patterns. She was the only competition entrant. She devised new ways to account for the elastic vibrations of plates, but did not manage a complete solution of the problem. The judges did not award her a prize but, after two further attempts, she became in 1816 the first woman to be awarded the Grand Prize in Mathematics of the Paris Academy of Sciences.