Synchotron shines a light in the darkness of the Middle East 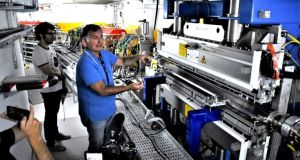 Sesame scientific director Giorgio Paolucci points out one of the magnetic devices used to accelerate electrons around the synchrotron’s ring at the facility in Jordan. Photograph: GeekWire/Alan Boyle

The road to Sesame climbs through the hills on the outskirts of the Jordanian capital Amman, past suburban villages, small farms and fields of olive trees. The blocky square building could be anything, but inside electrons are speeding around in a particle accelerator, shining a light that is unique in the Middle East.

Not just in scientific terms, but in political terms too. When Sesame’s council meets, Turks sit alongside Cypriots, Israelis beside Palestinians and Iranians.

But they are scientists first. Holding it all together, and making Sesame physically possible, is this location, Jordan. “Jordan is the heart of the Middle East, and all citizens of different countries can come here,” says Prof Khaled Toukan, Sesame’s director. “We are talking one neutral language, we are talking science.”

The name “Sesame” was chosen as a cultural reference in the region, evoking “open Sesame”, but for scientists it stands for Synchrotron-light for Experimental Science and Applications in the Middle East. A synchrotron light source is an accelerator-based facility, which uses electromagnetic radiation emitted by electron beams to study a range of properties of matter. There are about 60 such synchrotrons worldwide, but Sesame is the first in the Middle East.

Modelled on Cern, as an intergovernmental research centre, the project was developed under the auspices of Unesco. The current members are Cyprus, Egypt, Iran, Israel, Jordan, Pakistan, Palestine and Turkey. Physicist Vincent McBrierty, professor emeritus at Trinity College, was involved in the project in its early stages, while he was vice-provost of Sultan Qaboos University in Oman.

“I looked around at one of the early meetings, and I couldn’t conceive of any other situation where you could get this disparate group of countries around the same table. The fact that it got through when tensions were rampant is a real success story.”

The first two beamlines to be installed were the X-ray absorption fine structure/X-ray fluorescence spectroscopy beamline and the IR (infrared spectra microscopy) beamline. On the day I visit, scientists are working on the installation of the third beamline, which will focus on materials science.

The three series accelerator complex is enclosed in lead to prevent radiation leaks. As it’s not running today, we’re allowed to descend into the tunnels, though the health and safety officer attaches a dosimeter to my jacket just in case.

The circulating electrons emit synchrotron light as their trajectories are deflected by bending magnets, while other magnets control the specific characteristics of the beam. The beamlines then collect the synchrotron light and convey it to the experimental chambers, where optical elements focus the light on the individual samples being studied by scientists.

“The specialised beamlines can be used for very different disciplines, using the power of synchrotron light, which is so much more powerful than any normal X-ray,” says Dr Walid Zidan. “Applications include life sciences, medicine, archaeology and energy among many others.”

In its first two years of operation Sesame has facilitated more than 70 experiments. An Egyptian group of scientists focused on Alzheimer’s disease used the facility to investigate the deterioration of cells in the brain. Scientists have also studied the chemical composition of mummies from Egypt and teeth from ancient Iranian sites.

A Turkish group investigated how to increase the lifespan of batteries to reduce their impact on the environment. The first peer-reviewed paper to emerge from a project at Sesame came from another Turkish group. The researchers looked at novel nanomaterials that can convert atmospheric waste, CO2, and biomass waste glycerol into carbon monoxide (CO) and hydrogen (H2), which can be used by industry.

Accelerators are big users of electricity, which is extremely expensive in Jordan, so Sesame sought funding for a solar power plant. It is now is the world’s first large accelerator complex powered solely by renewable energy, drawn from a 6.48 MW solar plant located next to the Jordan Atomic Energy Commission.

The solar project was supported by the Jordanian government and the EU, which has been a major donor to the project. Cern played a significant role in the construction of the main storage ring. Funding has been a challenge throughout, with several states in arrears with their membership fees. Politics has played a role too, with sanctions preventing Iran from transferring funds it had committed to capital projects.

Italy has recently funded a guesthouse, which has just been completed, and will allow scientists to stay onsite while their project is using the beamlines, making the kind of personal contacts that help the development of science and build connections between the member countries. Proposals to use the beamlines are also accepted from other non-members.

For universities in the Middle East, Sesame is a way to introduce their students to a world-class research facility and to try and reverse the brain drain in the region. A Najah National University at Nablus in the West Bank is just 50km away.

“Palestine is very fortunate to have Sesame on its doorstep,” says assistant professor Dr Ahmed Bassalat. “It is a window to international collaboration in science at a very high level and I have used the facility for the training of a number of students in my laboratory.”

It’s been a long hard road to get Sesame up and running, but it is probably one of the most successful examples of science diplomacy operating in the world today.

“The idea was first conceived in 2000, and there have been so many wars and revolutions since then,” says Prof Toukan. “And yet we made it. So many issues have been overcome. It’s a sign of our ability to work together and to cultivate potential in an area marred by conflict, by walls, and by division. It’s a light in the region.”