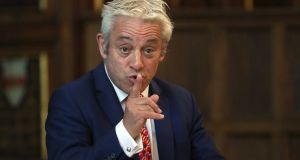 The former speaker of the House of Commons John Bercow said he would prefer to speak about values for the future rather than talk about Brexit during a visit to Dublin.

Speaking at a gathering in the RDS to mark the ending of BT Young Scientist & Technology Exhibition (BTYSTE), he added, “Now is not the time for a fulmination of a speech about Brexit.”

Noting people’s wish for candour, however, he made no bones about his genuine belief that “Brexit is the most colossal foreign-policy blunder by the UK in the post-war period.”

Nor did he want it to fail, and he accepted the UK government had the authority and the numbers to proceed with it.

He wished certain values in any scenario would apply including a distinctly internationalist mindset, given increased interdependency, when “no one country can do it alone”. This was the case in trade policy and in addressing climate change; human trafficking, terrorism, the war on drugs, fraud and identity theft.

In addition, something had to be done to improve the civility of discourse in parts of the main media and within social media networks. It was about accommodating difference and accepting “democracy is not about decibel levels” – “and that lesson that should be learned at the highest level”.

Referring to hateful, sexist and racist abuse deployed “on the other side of the pond” against opponents because they were opponents, he said: “And frankly the president of the United States ought to know and care to do better than that.”

He wished to make the case for “intergenerational respect”, not just for senior citizens but also for the next generation, “who are going to have to try to fashion co-operative partnerships in Europe post-Brexit and to trade their way in the world”, so much so 16- and 17-years old ought to have a say in the heart of democracy.

He opened his address with “ciúnas, ciúnas!”; the nearest Irish equivalent to “order, order!”

Mr Bercow said he had wished his tenure as speaker would be marked by reform and innovation in the chamber, where those in power had to come into the house more frequently to answer urgent questions of the day. The chair had to intervene more though this was “not telling them what policies should be”.

He paid tribute to the BTYSTE on the basis of being an all-Ireland event, where young people’s work is underpinned by collaboration that showcases Ireland to magnificent advantage. On the winners, he added, “what an outstanding representation of modern Irish youth”.

Co-winner Cormac Harris of Coláiste Choilm in Ballinchollig, Co Cork, said they hoped their project revealing gender stereotyping in children as young as five would increase awareness of how it is limiting career choices of both girls and boys.

His colleague Alan O’Sullivan said they hoped to go back to primary schools to evaluate the impact of their educational programme to counter gender bias.

More than 50,000 people attended the 56th staging of the event. It coincided with the setting up of the Irish, British and American Junior Chamber of Commerce by sisters Kate and Annie Madden who started their own business, FenuHealth, after their project about equine health won a major prize at BTYSTE in 2015. The British and US embassies have lent support to the initiative.

“We think there is a huge need for a junior chamber . . . to simplify international business and help young entrepreneurs enter more international markets,” said Kate, a student at UCC.

A delegation from Jordan attended the exhibition with a view to staging one based on the successful Irish model in 2021. Dr Penelope Shihab, a leading Jordanian scientist, said they were highly impressed by BTYSTE. “I just loved the energy and interaction between pupils, teachers, the public and even the politicians”.

She paid tribute to the Irish Ambassador to Jordan Vincent O’Neill for his support in establishing the exhibition. Since 2017, Irish Aid, via the Irish Embassy in Kenya, has been supporting Young Scientists Kenya, which is also modelled on the BTYSTE and was set up when Mr O’Neill was ambassador there.