‘This is not how sequoias die. It’s supposed to stand for another 500 years’ 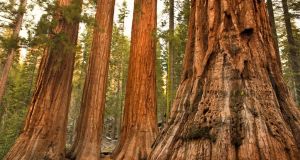 Some giant sequoias in in California are more than 3,000 years old. Photograph: Getty Images

Giant sequoia trees, the largest living organisms on the planet – some more than 3,000 years old – have started dying from beetle attacks linked to the climate emergency, the preliminary findings of a new study have revealed.

The deaths of the trees, some of which lived through the rise and fall of hundreds of empires, caliphates and kingdoms – not to mention the inauguration of every US president – have shocked researchers in their speed and novelty.

In Sequoia and Kings Canyon national parks in the Sierra Nevada, California, 28 giant sequoias have died from a seemingly deadly interaction between bark beetles, drought and fire damage since 2014, according to a joint National Park Service and US Geological Survey study that will be published later this year.

Beetle attacks appear to have killed the trees in previously unseen ways, claiming mature standing giant sequoia trees known as monarchs. In addition to the beetle attacks, high-severity fires strengthened by drought and decades of natural wildfire suppression have killed 12 giant sequoias since 2015 in the national parks.

The deaths have challenged age-old assumptions about the tree, which only grows on the western slopes of the Sierra Nevada and is fabled for its near-indestructibility, attracting visitors from across the world.

“It’s unheard of. It’s never happened before,” said Dr Christy Brigham, chief of resource management and science for Sequoia and Kings Canyon national parks, who oversees the welfare of ecosystems in the parks. “You think giant sequoias don’t die in fire, you think giant sequoias can’t be killed by insects. That’s not true any more.”

According to more than 100 years of records preceding California’s 2012-16 drought, sequoia trees either died by falling over or suffering near total crown scorch in wildfires, never while standing upright. But since the historically hot and dry drought, researchers have recorded trees dying “from the top down” with the notable presence of bark beetles in their crown.

Although the number of trees that have died is a small proportion of the approximately 6,000 sequoias in the park, Dr Nathan Stephenson, the US Geological Survey forest ecologist who conducted the research, said he expected more to succumb to beetle attacks if, as expected, droughts become more severe and frequent in the future due to the climate crisis.

“I don’t expect a threshold to be passed, at least in my lifetime, when there’s suddenly gigantic outbreaks taking out whole groves of giant sequoias. I suspect it will be [beetles continuing to hit] the most stressed sequoias but they will be doing more sequoias, because there will be more stressed sequoias.”

Stephenson said while there were no beetle attacks marked in park records, he suspected it might have happened before “deep in history”, but more needed to be done to understand what the insects were doing to the trees.

Climate crisis contingency plans for giant sequoia tree deaths and high severity wildfires made for the 2050s are being enacted now, the National Park Service said. Ecologists have taken measures such as planting seedlings at higher elevations outside the areas sequoia trees usually grow and increasing prescribed burns to thin the forest as much as possible.

Fire is vital to ecosystems in the Sierra Nevada mountains, clearing the forest floor and allowing new seedlings to establish themselves. The sequoia tree needs slow burning fire to reproduce, but decades of fire suppression has meant that burns have not taken place in some parts of the forest for over a century.

As a result, the buildup of fuel in the forest means that when fires do take place, they are more intense than usual, killing sequoia trees in the process.

“For the sequoias that died in fires, it’s a combination of past management practices plus the hotter drought that ganged up to kill so many,” Stephenson explained. “Sequoias have died in past fires when it hasn’t been an extreme hot drought, but it was fewer. Again, it might be a warning shot across the bow that if it continues to warm as projected, you might get more severe, longer-lasting, hotter droughts and sequoias will be exposed to those kinds of wildfires.”

Tens of millions of trees have died across the US, ravaged by pests, wildfires and the effects of the climate crisis, research in August found. In February 2019, the US Forest Service announced 18 million trees had died since 2017 in California, bringing the total to more than 147 million for the years since the drought began in 2010. – Guardian