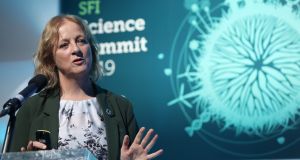 Dr Una FitzGerald at the 2019 Science Foundation Ireland summit. ‘On November 7th, our Cúram lab at NUIG became the first lab in Europe to be Green Lab certified,’ she says. Photograph: Jason Clarke

What is the main area of research in neuroscience?

“I am interested in brain cells that become damaged during the autoimmune disorder multiple sclerosis. I am currently the lead PI (principal investigator) and co-ordinator of a €3.9 million EU-funded Innovative Training Network, which aims to develop a novel device for treating the late, progressive phase of MS.

The consortium will train 15 PhD students based in eight countries across Europe and five of these students are based in Cúram, the SFI-funded Centre for Research on Medical Devices at NUI Galway.

You also lead the Galway Green Labs initiative – how did you develop an interest in the environmental impact of labs?

I was inspired by a book that I read in 2018 called No. More. Plastic. by Martin Dorey. I immediately changed my shopping habits, I bought keep cups, reusable water bottles and life-long shopping bags. That was all very well, but once I walked through the labs at work, alarm bells started ringing, as I was witnessing and contributing to the wholesale disposal of large volumes of laboratory plastics on a daily basis.

What did you do next?

After doing some digging online, I discovered disturbing statistics about the impact of lab activities on the environment. For example, while the average Irish person generates 61kg of plastic per year, a study completed in the University of Exeter estimated that the average bench scientist generates around 1,000kg of plastic per year. In addition, labs can use 10 times more energy than office spaces.

How did you start to make your own lab greener?

By far the best road map that I found for implementing green lab practices is produced by mygreenlab.org – a non-profit company whose mission is to create a culture of sustainability through science.

Its CEO, Allison Paradise, is a neuroscientist who left the lab in 2013 in order to set up the non-profit. She is an inspiring leader. One statistic she explained stuck out for me, which is that if just 2 per cent of lab plastics were diverted from landfill, it would offset carbon emissions equivalent to the planting of 100 million acres of rainforest. We found the Green Lab Certification programme run by MyGreenLab to be a great tool for defining and improving laboratory practices.

What practical steps were involved?

The lab was given an initial rating and, over the following six to eight months, our researchers and facilities managers collaborated with staff in MyGreenLab to improve scores and embed green lab practices within the workplace.

We were over the moon when we heard that our final rating was in the top-scoring band of “green”. On November 7th, the same day that I gave a talk about green labs at the Science Foundation Ireland Summit, our Cúram lab at NUIG became the first lab in Europe to be Green Lab certified.

Congratulations! What would you say to others who are alarmed by the rising tide of single-use plastics and other consumables in the lab?

The clock is ticking and the time to green our labs is now! We hope to roll out the initiative across Ireland – we have many labs across third-level institutions, public sector bodies, State and hospital facilities, and I think lab users and funders can play a huge role in making them greener.

To this end, I was delighted to have recently been invited to chair the Sustainable Energy Authority of Ireland working group that is focusing on greening public sector labs.”