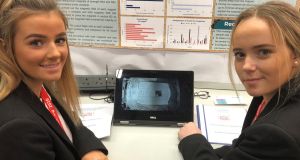 Ants are considered fiends when they cause infestations or revered as an essential part of nature, depending on your perspective. But two students from St Aloysius College in Carrigtwohill, Co Cork, believe ultimately they get an unfair press.

Transition year students Amy Morrissey and Anna Ring wanted to find a way to get them to move on when they infest an area in domestic buildings, by avoiding standard killer powders or crude forms of extermination. They have concluded magnets can do the trick.

Proof of this, backed by video evidence, was on display at the BT Young Scientist & Technology Exhibition (BTYSTE) in Dublin’s RDS on Friday.

Magnets work because ants have a magnetic compass for directional purposes, Amy explained. “They are a common problem is households, yet they play a vital role in nature, being essential to the food chain, so we want to deal with them in a sustainable way.”

In a series of experiments recorded on video they have shown weaker magnets have little effect but stronger magnets, notably one named N52, had a considerable repellent effect. Having observed online how an active mobile phone with its electromagnet effect had a dramatic effect, “this is where we want to extend our research,” she said.

“We think the electromagnet, such as that found in a mobile phone, could increase the effect by a factor of 20,” Anna added.

There is a widespread perception that meat and dairy products are bad for the environment and that a vegan diet is much better in that regard. “I wasn’t really convinced. I questioned that,” she added.

While vegans have to ensure they get adequate protein, this is often by relying on food imports that have high carbon miles attached to them, she noted. So she decided to compare a vegan diet based on recommended daily allowances on key nutrients and the omnivore diet which is based on the food pyramid which includes meat and dairy.

She then tracked the carbon footprint and factored in the food miles because so much of the products involved are imported into Ireland. This month alone, broccoli, lettuce and beetroot imported from France and Spain were dominating Irish supermarket shelves when they could be grown in Ireland with a significantly reduced carbon footprint.

“Supermarkets are not supporting local growers,” Kaitlyn added, but there was also a knowledge deficit among Irish consumers. “People don’t know the [CARBON ]impact of importing food.”

Her research backs the case for growing your own, “even if it’s just a window box; it has a big impact.” In addition, “people should not worry about the appearance of the food, especially when half the food and veg grown globally is thrown out because of its appearance.”

The winners of the 2020 BTYSTE will be announced on Friday night, while the exhibition is open to the public up to 5.30 pm on Saturday - more information is at www.btyoungscientist.com