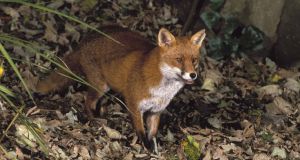 Urban legends: we could track the secretive night lives of urban foxes and hedgehogs and uncover the shadow neighbours rarely seen in person

My friend has a video alarm system on his house. It is a motion sensor that triggers a short video capture and pings the notification to his phone, which keeps him up to date with the busy, and usually unobserved, animal activities in the three or four square metres around his front door.

He regularly gets video messages from the local cats as they patrol past his front door on the nightly prowl round their territory. Then there’s the occasional notification from the resident spider as she spins her web near the sensor, unaware that her fly-catching attempts are being observed and the cobweb noted for future removal.

These casual meanderings of nature into our technology webs may lead people to enter purposefully into the nature observation world. Observation of nature and finding meaning in those observations is a fundamental part of human experience.

Recognition, identification and memorisation of features and locations would have been the difference between life and death back when the height of human technology was the use of sharpened sticks for digging or killing. Our need for food recognition skills has waned somewhat, with the biggest challenge now how to find the right aisle in the supermarket when you’ve run out of rice.

AI in our pockets

It’s enjoyable knowing who and what I’m sharing my weekend hikes or backyard with, but it takes time and effort to learn how to tell a great tit and blue tit apart, which kind of speedwell is in my lawn or whether that mushroom is likely to kill me or not. To make it easier I have been playing around with nature observation and identification apps on my phone.

We now walk around with powerful artificial intelligence in our pockets or bags. Algorithms that process information from photos or videos can help us to recognise thousands of species that share spaces with us. One of my favourite apps is Flora Incognita which prompts you to take photos of a plant you want to identify from different angles and quickly feeds back what it is likely to be.

It gives you other photos of the likely species and a link to the Wikipedia page to help you find out more. The app Seek covers animals, plants and fungi and instead of taking still photos, you use your phone camera to scan the environment and as you move around the object it homes in on the most likely candidate species. A few bumblebees were chased around the kids’ playground trying it out during the summer.

A really good Shazam app for birdsong is still missing, where you can point a phone at the morning twittering in the trees and get, not just the species, but whether the call is a regular territory defending song or an alarm call.

This is all great fun but it also has a hugely important scientific use. The Seek app is linked to a massive database of citizen observations of nature callediNaturalist. As more and more people observe and record what is around them, knowledge of the world’s animals, plants and fungi is growing. These observations can be quantified, mapped and interrogated for broader patterns of species movements or decline.

There is still no match for the human eye and brain as you get serious about species identification, but the gateway drug of AI image recognition can get you hooked on tracking down exactly which of the 100 species of bees in Ireland you’ve just seen on the dandelions in your lawn.

You might start to casually browse a facebook groupfor invertebrate identification where people help each other out by posting and commenting on photos of assorted slugs, bugs and creepy crawlies. Before you know it, you might have signed up to a butterfly identification and monitoring course at the Biodiversity Data Centre and start contributing to citizen science projects tracking the fates of Irish butterfly species.

Scientists already use Google Street View to monitor trees and the photo sharing website Flickr to characterise which elements of nature appeal most to humans. Imagine the picture of front-door nature we would get if we uploaded all the security cameras around a neighbourhood with species recognition software and pushed the data to a shared database.

We could track the secretive night lives of urban foxes and hedgehogs and uncover the shadow neighbours rarely seen in person but who we share our stomping grounds with. Perhaps my friend would get regular notifications of how the local foxes are doing compared with last year.

Making the invisible visible through the use of technology increases our connection with nature and may also increase efforts to keep nature in our lives.