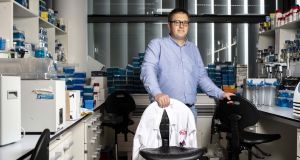 The human body contains trillions of viruses known as bacteriophages, which attack and live inside bacteria that form part of the human gut – the mix of microbes making up the “microbiome”.

The most abundant of these viruses are crAssphage (discovered in 2014), which feed on human gut bacteria, and are also found in the sewage of a third of the world’s countries studied.

Up to 2018, they had never been grown in a laboratory but Dr Shkoporov succeeded in growing them for the first time. The funding of €910,000 over five years will allow him to better understand the unusual crAssphage lifestyle which allows them to continuously co-exist with their bacterial targets in huge numbers. This may be a key to the development new treatments for a range of diseases.

One hundred trillion symbiotic microbes make up the human microbiome, with 95 per cent of them in the gut. Many diseases have been linked to the composition of the gut microbiome. However, current microbiome science lacks complete understanding of the role of bacteriophages which infect bacterial cells.

Researchers at APC Microbiome Ireland have been studying the gut microbiome for over the past 15 years, while a team led by Prof Colin Hill and Prof Paul Ross are focusing on “the virome” – sometimes referred to as “the dark matter of the microbiome”.

Among questions they have been asking are what role bacteriophage may play in microbiome structure, whether or not they have a direct effect on human physiology, and if we can use them as biomarkers to indicate microbiome stability and diversity.

“My research focuses on understanding crAssphage lifestyle, which could have significant impacts for the development of therapeutics, improving human health and advancing our understanding of our own body composition,” Dr Shkoporov explained.

He predicted future advances “will depend on our ability to understand how functionality of individual bacterial cells – and the whole microbiome – is affected by bacteriophages”.

From Moscow originally, Dr Shkoporov has been living with his family in Cork for the past five years where he has worked with Prof Hill in the gut phageomics group.

He holds doctoral degrees in medicine and microbiology from the Russian State Medical University in Moscow, where he also spent several years as a postdoctoral scientist working on bacteria of the human gut.

His recent work in the APC has been focused on the role of bacteriophages in attacking anaerobic bacteria associated with inflammatory bowel disease, and their potential to serve as indicators of gut inflammation. This project has been supported by Science Foundation Ireland and Janssen Biotech – part of Johnson & Johnson.

Dr Shkoporov is married to Dr Ekhaterina Khokhlova, a fellow microbiologist at UCC who has also contributed to the crAssphage story.

Outside of his work, he has a keen interest in history, classical music and technology. “I found a perfect second home for me and my family in Ireland, a country with long and dramatic history, rich cultural tradition, and incredibly warm and welcoming people,” he added.

UCC vice-president for research and innovation Prof Anita R Maguire congratulated Dr Shkoporov on receiving the research funding. “This award provides Andrey with an outstanding opportunity to build and expand his research career, providing an excellent platform for future initiatives,” she added.