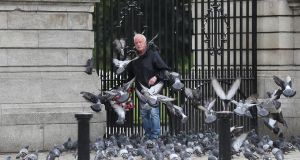 Charles Darwin was obsessed with pigeons. To be fair, he was also obsessed with barnacles, earthworms and plants that move and climb about. But pigeons were close to his heart. He owned them, bred them, experimented with them and painstakingly documented them. Darwin’s correspondence shows that pigeons were mentioned in more than 400 letters to and from him over the years.

Darwin does not discuss only his observations on pigeons in this correspondence, but also has some choice commentary on pigeon fanciers, the men he met at the “Columbarian Society”. One he describes as “a queer little fish”, while another was an “odd little man (NB all Pigeons Fanciers are little men, I begin to think)”. It is not recorded what the pigeon fanciers made of Charles Darwin. In any case, he goes on to describe pigeon fancying as “a noble & majestic pursuit, & beats moths [and] butterflies”.

Darwin travelled widely, collected many wild specimens and thought deeply about a huge diversity of animals and plants. So why did pigeons intrigue him? Darwin’s theory of natural selection, and the beginning of modern evolutionary biology, was rooted in his observations and experiments with artificial selection.

Every animal and plant breeder, before Darwin’s time as well as now, understands clearly the importance of inheritance and the role that inherited variation plays in the development and maintenance of breeds.

It is clear to see the role of human preference in purposefully bred varieties and breeds of pigeons, chickens, daffodils, dogs and cows. The prettiest, strongest, tastiest, earliest-flowering or fastest made it into the next generation.

Darwin’s great breakthrough proposed that a parallel mechanism to artificial selection was natural selection. While human preference was critical for determining which individuals got to pass their inherited characteristics on to the next generation of a breed, the environment played that role in the evolution of species by natural selection in the wild.

There is an interesting middle ground between artificial selection and natural selection, which is those animals, plants, fungi and micro-organisms that are unconsciously selected by humans, or which have become attached to our way of life and evolve in concert with our habits. Weeds are a brilliant group of plants that have adapted to our gardens, farms and streets. There is a well-known saying that weeds are just plants in the wrong place. And by wrong, we mean undesirable to a particular human, in a particular place at a particular time.

Bright blue cornflowers (Centaurea cyanus) were once very common weeds of arable fields, but the advent of modern herbicides pushed these plants to field edges and disturbed ground. Some of these weeds of old agricultural systems are now highly endangered themselves and the British plant conservation charity PlantLife lists many of them. The future of the cornflower, which is not native to Ireland, now seems to be as a component of wildflower seed mixes scattered on roadsides, meadows and gardens. It has a past, and a future, very much tied to human activities and preferences.

To survive in modern times you need modern evolutionary solutions. Our most troublesome agricultural weeds are now those that have evolved resistance to multiple herbicides and are often grasses that are weeds of barley, wheat and oats. Even those almost invisible weeds that live in the cracks of our pavements have been busy evolving strategies for survival in the urban jungle.

One of my favourite examples of city evolution is the delicate little dandelion-like Holy Hawksbeard (Crepis sancta), which produces large and small seeds. Plants that live in the little scrapes of soil around street trees in a sea of concrete mostly produce the larger seed types that stay within that patch, whereas those that grow in continuous open ground produce the smaller type. Smaller seeds have the ability to disperse farther to find suitable patches.

Like weeds, pigeons have become accustomed to human habitats, and the wild cliffs of the original rock dove species have turned into the steep city canyons and junk food diet of feral pigeons. Look around you and notice the incredible selection pressures that our way of life is exerting on the natural world. What does the future hold for weeds, pigeons and us?