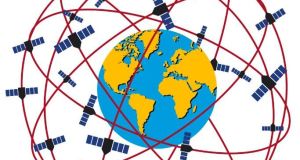 The earthly globe is spherical; more precisely, it is an oblate spheroid, like a ball slightly flattened at the poles. More precisely still, it is a triaxial ellipsoid that closely approximates a “geoid”; a surface of constant gravitational potential.

Positions on the globe are given by latitude, longitude and height above or below the reference ellipsoid but, to depict the Earth’s surface on a flat sheet, we need a map projection. A glance at any atlas of the world will reveal several projections, the suitability of each depending on the location and extent of the region being mapped.

There is no perfect way to map the Earth. Whatever method is used, distortions are unavoidable. It was the great mathematician Carl Friedrich Gauss who demonstrated the impossibility of avoiding inaccuracies. There are numerous projection methods, each with advantages and shortcomings. The map invented by Gerardus Mercator in 1569 quickly became an “industry standard”. With his map, navigators could plot a course as a straight line from departure point to destination.

On Mercator’s projection, all lines of latitude have equal length, and the areas of regions in high latitudes are drastically exaggerated. He projected the globe on to a cylinder touching the Earth around the equator. This is precise in the tropics, but not good enough in middle and high latitudes.

By a simple but ingenious trick, a map that is accurate in the vicinity of Ireland can be obtained: the cylinder is tilted through a right angle so that it touches the globe along 8°W, the meridian that bisects Ireland. The resulting projection is called the Irish Transverse Mercator (ITM), and it is the starting point for the maps produced by the Ordnance Surveys of Ireland and Northern Ireland.

On the ITM, all latitude and longitude lines except the central meridian are curved. It is advantageous to have a regular grid with straight lines parallel to and perpendicular to 8°W. To achieve this, we define a national grid for Ireland. The original national grid was established many decades ago, and served as a basis for mapping through the 20th century.

But the satellite-based global positioning system (GPS) has revolutionised mapping and surveying, providing a remarkably high-precision means of specifying locations.

The relationship between the old national grid and GPS co-ordinates involved awkward mathematical transforms, which could lead to inaccuracies. So, around the millennium, a new grid, the ITM, was established, and it has now become the standard system throughout Ireland.

The origins of the old and new grid systems are at 53.5°N, 8°W, a point lying in Lough Ree – “where the three counties meet”. Grid co-ordinates in the two systems are close in value. To avoid negative values, the origin of the old system was moved to a point southwest of Kerry. Then the co-ordinates eastward and northward ranged from about 0 to 400km and 0 to 500km. When the new grid system was introduced, the origin was moved even farther away, so that the new co-ordinates range from about 400-800km and 500-1,000km.

A full grid reference needs two six-digit numbers, giving a position to the nearest metre. The grid reference of the spire of Dublin in the old system is (315904, 234671). With the new grid, the co-ordinates are (715830, 734697). By checking the range, we can immediately see which grid is being used: since there is no overlap between the old and new co-ordinates, the possibility of confusion is removed. The new ITM grid is intimately related to the GPS system and no problematical transformations are required to convert between the two systems.

Peter Lynch is an emeritus professor at UCD school of mathematics and statistics. He blogs at thatsmaths.com