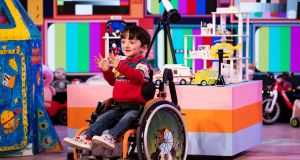 A little boy who dreams of space travel has turned into a star and attracted the attention of the global space community after a stellar appearance on the Late Late Toy Show on Friday night.

Adam King’s father David said on Sunday that the family had been “blown away” by the response to the six-year-old’s appearance on the show.

However, he said he was unsurprised by how astronauts and space engineers including Commander Chris Hadfield and Nasa had responded to his boy’s ambitions because “more than most people they realise the importance of having dreams”.

On the Toy Show on Friday night, Adam from Cork told host Ryan Tubridy that he dreamed of commanding a space mission with Nasa one day. When he was asked if he would like to be an astronaut he said “I can’t be an astronaut because I have brittle bones.”

“So instead you can be the guy with the microphone underneath, on the ground?” asked Tubridy after which Adam, seated in his wheelchair, showed him how to properly count down a launch from 12 to one.

His appearance almost immediately attracted the attention of Canadian astronaut and former International Space Station commander Hadfield. who posted a video clip of the appearance and addressed the boy personally. “Adam – I’ve been lucky enough to CAPCOM many spaceflights. We should talk space together. Take care, be good.”

Adam - I’ve been lucky enough to CAPCOM many spaceflights. We should talk space together. Take care, be good - Chris@RTELateLateShow https://t.co/XacYA9ncKT

In a tweet, Nasa said: “Adam’s kind heart and adventurous spirit inspires us. There’s space for everybody at NASA, and we can’t wait for him to one day join our team of dreamers. We’ll be here when he’s ready.”

The Twitter account of the Irish Embassy in the US got involved and said: “Per aspera ad Astra [through hardships to the stars], Adam. Keep looking to the stars young man. In the meantime, we’ll reach out to our friends @NASA & see if they can’t help bring your dreams a little closer.”

Irish aeronautical engineer Dr Norah Patten addressed him on Twitter, saying she would love to meet him some time and hear about his love of space. “You’re a star,” she said.

“We have been absolutely blown away by everything that has happened this weekend and as a family we are very humbled and very grateful,” David King said. “It made me realise that people are good, they are good locally and globally.”

He said “things like this don’t happen very often in a lifetime. What was wonderful to us was that so many people were getting to see what we have seen in Adam since the day he was born. We have always known how special he is and it was lovely to see that coming across on the show.

“He was so unbelievably calm and relaxed I honestly don’t know where he gets that from. The only thing I was nervous about beforehand was that he might be stressed and would not enjoy the experience but from the second he appeared I knew everything was going to be fine. He even winked at the camera at the very start.”

David, who published a book called But Really . . . Adventures with a Difference with the aim of inspiring families of children with additional needs, said he was unsurprised by the manner in which astronauts and the wider space community reached out to his over the weekend.

“Everything they do is about achieving the impossible and realising your dreams. These people realise the importance of having dreams.”

He said both Adam and his older brother Danny were “obsessed with Commander Hadfield” and they often watch the International Space Station pass over their home with the family telescope.

He said the whole family was on an emotional high adding that the next thing Adam was looking forward to was school on Monday.