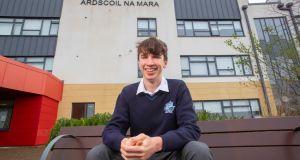 A sixth year student who developed an innovative video analysis measurement system for patients recovering after joint injury or joint surgery has won the 2020 SciFest contest.

Caoimhín O’Leary from Ard Scoil na Mara in Tramore, Co Waterford, used advanced computer software to measure joint and bone position. The system can be accessed remotely, and is quicker and less invasive than current rehabilitation monitoring techniques, according to the judges.

He will represent Ireland at the Regeneron International Science and Engineering Fair next May in the US.

SciFest is an all-island Stem (science, technology, engineering and maths) initiative which fosters collaborative and inquiry-based learning among second-level students. Regional fairs featuring entrants and the national final were staged online this year because of Covid-19. Students, teachers, parents and the public were able to view and participate in the event virtually.

“The ongoing pandemic has shown the importance of science to modern societies and the students competing today will be the scientists of tomorrow. I wish to congratulate all the participants . . . we were delighted to see such great engagement with our new online platform. I’d like to extend huge congratulations to Caoimhín,” she added.

Minister for Education Norma Foley said Stem subjects were vital for equipping young people “with creativity, adaptability, problem-solving and critical thinking – skills which are so important for their future. SciFest is an excellent initiative that supports and enhances these skills in our students”.

“The future of Stem in Ireland is clearly very bright. The standard was incredibly high, and I wish hearty congratulations to Caoimhín on the success achieved,” she added.

SFI head of education and public engagement Margie McCarthy said Ireland was a global leader in many aspects of Stem, “and if we wish to build on this success in the future, we must encourage a love of the field among our young people. It is great to see so many innovative projects on display this year, it gives us great hope for the future”.

Other award winners were:

Aoibheann Mangan won the scientist of the future award for her project “Hospital Holly and Henry – A Mobile Trinal Interactive Solution to Eradicate Children’s Fears of Medical Procedures”;

Erinn Leavy and Sophie McCardle won the Irish Science Teachers’ Association award for analysis of “Physiological and Running Metrics in 3K Cross Country Running in Comparison to Track and Treadmill”;

Alice Davoren and Emily Cullinan won this year’s Technological Higher Education Association award for research into “The Effect of Greywater on Soil Nutrients and Earthworm Population”;

Giulia Baratta won the SciFest life sciences award for her project on “Toxicological Investigation of Pesticides Using Paramecium as a Model Organism”;

Sean Moloney and Michael Ware won the Specsavers making a difference runner-up award for research into “The Challenges of Transitioning from Primary to Secondary School for Students with Autism”;

Molly Cunnane and Katie Hannelly won the Specsavers making a difference award for “Our Farmers – “Deaf as Doornails?’ An Investigation into the Effect of Machine Noise on our Farmers’ Hearing”;

Ellen Woodward won the Boston Scientific medical devices runner-up award for her project titled “Inside Out’ – A Wearable Device that Externalises Internal Emotion”;