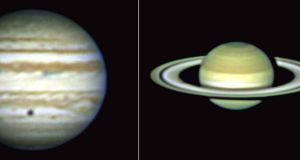 A file combination photograph of Jupiter (L) and Saturn as taken by the Subaru telescope on Mount Mauna Kea on the island of Hawaii. Photograph: Tokyo Astronomical Observatory

For some celestial events you really do have to wait almost a lifetime.

Jupiter and Saturn met three times in the sky during 1981, but it was while I was only figuring out the basics of astronomy as a teenager. The gas giants then had another encounter in May 2000, but on that occasion, they were too deep in the morning twilight to be easily seen.

This month, Jupiter and Saturn convene again on the evening of the 21st when they are just six arcminutes apart. That remarkably small angular separation is equivalent to only one-fifth the apparent diameter of the full moon.

To put it in context, your little finger held up at arm’s length easily covers the moon, so imagine the gap between Jupiter and Saturn as just a fraction the width of your fingernail.

The regular nature of these encounters is because Jupiter orbits the Sun every 11.86 years, but Saturn takes 29.45 years to do so. It is therefore inevitable faster moving Jupiter periodically catches and overtakes Saturn as they circle the zodiac so that every 19.6 years on average, we have what is termed a Great Conjunction.

At the start of December the two planets are two degrees (four moon-widths, or your thumb held at arm’s length) apart low in the southwest after sunset, with Jupiter the brightest “star” in this area of sky, while dimmer Saturn is just to its upper left.

That distance is halved by the 11th, and the gap narrows further to just 0.4 degrees on the 17th when the crescent moon in the area makes for a striking scene. Thereafter, the space between them decreases by about 0.1 degree daily.

As twilight fades on the evening of the December 21st winter solstice, look low in the southwest after 4.45pm for a sight that will be rare, beautiful, and memorable when Jupiter and Saturn are closest. The two will be near the horizon however, and set shortly after 6.30pm, so an unobstructed skyline is necessar for to seeing them.

Although the two planets will not appear to merge as a single point, they will still be extremely close and a wonderful sight. Their distance will only be half that between Mizar and Alcor, the two stars in the middle of the Plough’s handle, although that is not a practical comparison though as both planets are much brighter than those stars.

Binoculars will offer a stunning vista of both planets in the same field-of-view, with some of the brighter moons of Jupiter also visible. You may need to use them at first to sweep up the planets around 4.45pm in the still twilit sky when Jupiter and Saturn are about 10 degrees (one fist-width) above the southwest skyline.

By 5.30pm the pair are only seven degrees up and sinking quickly, but they will be in a darker sky. A half hour later sees that altitude halved, and the two planets will likely appear lower if you do not have a flat horizon towards the southwest. Jupiter and Saturn then exit the evening sky stage at 6.30pm, drawing a final curtain on the drama.

In an eyepiece magnifying about 80 times on a telescope you can glimpse the extraordinary sight of Saturn’s rings, the disk of Jupiter, and the major moons of both planets all at the same time. That view is possible for a couple of days on either side of the 21st running up to Christmas and is bound to be live-streamed by amateur astronomers worldwide – but nothing beats seeing the real thing.

The two planets remain close a few days after their conjunction, and the gap is still only one degree (two moon-widths) at the end of the year. But they are edging towards the sunset glow and both will be difficult to see by mid-January, before going behind the Sun from our perspective later that month.

Great conjunctions have had some importance throughout human history, with the astronomer Johannes Kepler (1571-1630) even suggesting the star of Bethlehem may have been a triple conjunction seen in 7 BC. Perhaps thoughts might turn to the Christmas star again this year with this event occurring so close to the 25th? One thing is certain, though: In a world sometimes divided, the Great Conjunction on December 21st will unite many in wonder.

The Moon this month

Last-quarter moon falls on December 8th, new moon on the 14th and first quarter on the 21st, with the final full moon of 2020 on the 30th. A total solar eclipse on the 14th cuts a narrow swathe that starts in the south Pacific, and then tracks across Chile and Argentina, to end off the coast of Namibia. Regular eclipse fans, or umbraphiles, will find themselves unable to travel to the eclipse during the current pandemic, but a handful of tour groups have received permission from some countries to host expeditions to see it.

Other planets this month

Venus is up in the east around 5.30am at the beginning the month but will slowly lose height each passing day to end the year rising just 1½ hours before the Sun. The planet is to the Moon’s lower left on the 12th and to its upper right on the 13th.

Mars continues to burn bright these evenings and does not set until the early hours. It is through a telescope though that the most obvious change is noticed. By the middle of December, the apparent size of the planet’s disk is only half that in early October as it continues to recede from Earth. Mars is directly above the Moon when they are both due south at 10pm on the 23rd.

New moon on the 14th means perfect conditions for the Geminids, one of the richest annual meteor showers. The display peaks on December 13th, and from a dark site you may see a meteor a minute when Gemini climbs highest in the sky after midnight. The shower is rather broad so good rates can be expected the following evening too.

Gemini rises a little before 6pm, but the number of meteors seen will be initially low until the group gets a bit clearer of the horizon. Tracing their path backwards leads to a point of origin known as the radiant which can be found near the bright star Castor.

Geminids are bright and leave persistent trails, possibly due to the nature of the material shed by the shower’s parent body, the asteroid 3200 Phaethon. The object is sometimes dubbed a “rock comet” and solar heating at perihelion – the point in its orbit when it is closest to the sun – cracks its surface, causing dust and other particles to be ejected. The composition of a Geminid meteor is therefore a little harder than the fluff from most comets.

The stream is inclined to Earth’s orbit and we are presently fording its denser regions. But that situation will not last as gravitational perturbations by Jupiter shifts the dust trail. In only a few hundred years our encounters with the Geminids will be no more.

Japan’s Hayabusa-2 snagged a tiny sample of regolith from the asteroid Ryugu in early-2019, and its return capsule will be dropped off to land in Australia this December 6th when the probe does a flyby of Earth.

Hayabusa-2 has now continued back into solar orbit for a potential rendezvous with two further asteroids in 2026 and 2031. Uniquely, the mission deployed four tiny rovers onto Ryugu’s surface to investigate the environment there.

Evening passes of the International Space Station run until December 10th after which it switches to the morning sky from the 18th. Predictions for your location can be calculated on Heavens Above.

My free annual night sky calendar is now available to download. Although it highlights all the predictable celestial events visible during the year ahead, the sky can still spring surprises such as the beautiful comet Neowise last summer.

*John Flannery is a long-time amateur astronomer with an interest in the history and lore of the sky along with astronomical phenomena observable with the unaided eye. He is a member of the Irish Astronomical Society.