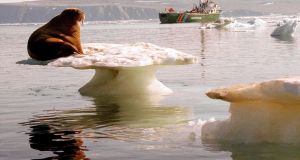 Demonising scientists who have evidence-based criticisms of the “scientific consensus” in the field of climate change is an insult to the subject and promotes scientism. Photograph: Reuters

Throughout most of my life science sat very low on the totem pole of public awareness. Most public attention was directed towards the humanities – literature, art, music, languages, philosophy, religion and so on.

But things have changed since the 1990s and public awareness of science rapidly climbed the pole. Indeed, some people now fear the relative positions of humanities and science on the totem pole have flip-flopped, with the humanities relegated to the “halfpenny place”. It would be a great pity if this happened. Science and the humanities provide essential and non-overlapping services to humanity.

The purpose of science is to discover how the natural physical world works. The results of scientific studies can often be applied to do useful things for human society and we call these applications technology. The modern world runs entirely on science-based technology. Science is very powerful but it purchases this power by severely limiting its domain to the natural physical world.

Science is silent on many matters of the greatest human importance, matters that make life bearable for most people and matters that are dealt with only in the humanities. Science has nothing to say about value, meaning, ethics, beauty or the supernatural. For example, science can explain how a human being is conceived, how it develops in the womb and is born as a baby, but has nothing to say about the value of this developing entity at any stage. To assess this value we must turn to the humanities; to philosophy.

Science advances in a zig-zag manner, not in a steeply ascending straight line. Scientific findings are always provisional and revisable in light of new evidence. Well-established scientific conclusions are the fruits of long periods of doubt during which the ideas are rigorously tested.

Science welcomes challenge and doubt, and only when a scientific hypothesis passes endless tests is it elevated to the status of theory. A theory is science’s best explanation of a phenomenon, sturdy enough to withstand all tests to date, for example, the theory of evolution.

He claims the American world view is now entirely technological, encouraging people to prefer practical questions to questions of meaning. “To ask of things not if they are true or false, or good or evil, but how they work.” We have become enslaved to machines “in the greatest assault on human attention ever devised”. Our technological world is an “engine of mental and spiritual dispersal that makes us wider only by making us less deep”. All knowledge is reduced to information, the most inferior kind of knowledge.

Wieseltier believes our technological world is a world of scientism. He calls scientism a curse, as opposed to science which is a blessing. Science is acutely aware of its limits but scientism is dogmatic, peddling certainties and believing the solution to every question is a scientific one. Scientism transforms science into ideology: “There is no perplexity of human emotion or behaviour that these days is not accounted for genetically or in the cocksure terms of evolutionary biology.”

One frequently hears phrases nowadays, such as “the science is settled”, “scientific consensus”, made when the particular science involved is still in the doubting, testing phase. In this phase science often changes direction. We should pay attention to the latest scientific announcements but must remember they are provisional and may change.

William Reville is an emeritus professor of biochemistry at University College, Cork