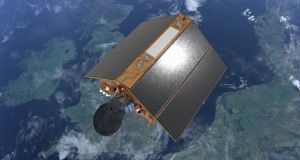 Sentinel 6, the latest in a series of European Space Agency (ESA) Earth observation satellites, which launches on Saturday in the US, will provide the most detailed data yet on predicted future sea-level increases and what’s required to protect coastal cities and towns.

Sea levels have been rising, scientists say, due to the melting of the Greenland and Antarctic ice sheets, which cause 45 per cent of the increase. The rest is due to expansion of the oceans as they have warmed up as a result of global warming.

“Sentinel 6 will further our knowledge of sea-level rise, and importantly provide warning of storm surges, which are a more immediate threat to the Irish coastline,” says Dr Fiona Cawkwell, a lecturer in Geography at University College Cork.

“Sea-level rise is a product of more than just melting of polar ice caps,” she adds. This latest satellite, she says, will continue the work of other missions in providing researchers with a more detailed and more nuanced picture of how much sea level is changing globally.

The rise in sea levels has threatened many coastal locations, with Dublin and Cork suffering flooding in recent years as a result. Up to recently sea levels were believed to be rising by about 3.2mm per year, but new evidence suggests it has increased to 4mm per annum.

“When you raise the sea level, not by too much actually, the impact of storm surges starts to become more and more significant,” says Craig Donlon, a mission scientist for Sentinel 6 at the ESA. “You only need a little bit of water to get through the storm protection system and it can take the whole lot down,” he adds.

Planners in local authorities are under increasing pressure to put the engineering works in place to protect homes and businesses. Sentinel will assist the planners to make better informed decisions on what’s needed by providing more precise data on local sea-level changes.

Donlon explains that Sentinel 6 will use an instrument called an altimeter. It works by firing a radar pulse at the sea surface, he says, which is reflected back to the satellite, and measured.

“We time how long it takes for that pulse to get emitted, reflected and received back in the satellite,” Donlon says. “What we can deduce then is sea surface height; from that you can get sea level and you can also get ocean dynamics. It’s like a virtual tide gauge in space. With Sentinel 6 we have measurements all over the planet.”

The Sentinel 6 will also be capable of detecting whether dangerous abrupt climate changes may be occurring, such as the cutting off of the Gulf Stream, which maintains Ireland’s benign moderate climate. If such an event happened, Europe could be plunged into an ice age.

“From Sentinel 6, we will be making measurements that allow us to see any major changes,” Donlon explains. “If you saw one of these big tipping points start, it wouldn’t happen overnight, not like the film shows, but we would start to see changes in the Gulf Stream.”

Improved weather forecasting is another area where Sentinel 6 is expected to make a big impact. It will do this, Donlon says, by giving meteorologists a far better understanding of where the warm and cold water is going, sea surface temperatures and wave heights.

“The altimetry data can be analysed to determine wave heights and wind speeds over the oceans, information that is very relevant to an island in the Atlantic like Ireland, ” says Noel Fitzpatrick, research meteorologist at Met Éireann, commenting on the Sentinel 6.

“This data may also be used to determine the intensity and potential track of tropical storms in other regions,” Fitzpatrick adds.

Techworks Marine is an Irish company based in Dún Laoghaire, which will make use of data from Sentinel 6 to provide marine monitoring services for the public and private sector in Ireland and overseas.

“Sentinel 6 will map 95 per cent of the Earth’s oceans every 10 days and will extend the continuity of satellite altimetry until at least 2030,” says Eimear Tuohy earth observation lead at Techworks Marine.

“Additionally data will be collected on atmospheric temperature and humidity which will help improve weather forecasting and climate models,” Tuohy adds.

The Sentinel 6 satellite has been jointly developed by ESA with NASA, the European Organisation for the Exploitation of Meteorological Satellites (EUMETSAT) and the US National Oceanic and Atmospheric Administration (NOAA).

It is scheduled to launch in California at 5.17pm Irish time onboard a Space X Falcon 9 rocket, and this will be streamed live by ESA TV.