Mayo scientist counting down to her first space flight

Dr Norah Patten, from Ballina, is set on a course to becoming Ireland’s first astronaut 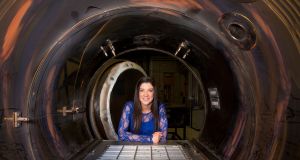 A boom in commercial space flights over the next decade will allow people to travel to space in far greater numbers, the woman who hopes to be Ireland’s first astronaut has predicted.

Dr Norah Patten (34), from Ballina in Co Mayo, was one of 12 participants from around the world selected to take part in a scientist-astronaut training programme in Florida in October, and is now on the list of candidates available to go to space.

Ever since she visited Nasa in Cleveland, Ohio at the age of 11, she has always wanted to fly into space.

She told The Irish Times she believed her credentials have been enhanced by pursuing a career in engineering and aeronautics.

She received her doctorate from the University of Limerick and worked at its Centre for Composites for three years. She has been employed by Boeing, and currently does work with the International Space University.

She did not believe there was a pecking order in securing a place on a space flight, but, based on the specialist training and support she had received, she expected the opportunity would come her way over the new few years.

This would most likely to be in a commercial “sub-orbital” flight that would go over 100km above the Earth.

Her ultimate dream, she added, was to visit the International Space Station (ISS). “Much of the training is about awareness,” she said, “how we react and behave under certain conditions.”

She had to wear a pressurised space suit and experience four times her normal body pressure when undergoing training.

In 2014, Dr Patten managed “The Only Way is Up” project which sent Ireland’s first student experiment to the ISS.

Dr Patten is appearing at a number of events this week at the BT Young Scientist & Technology Exhibition, including a question-and-answer session on Thursday with students attending the event.