Young scientists pit their wits against aliens and Alzheimer’s

At the Young Scientist & Technology Exhibition, the quality continues to improve

The 2018 BT Young Scientist and Technology Exhibition opens in Dublin, featuring 550 projects by 2,500 students from all over Ireland. Video: Bryan O'Brien 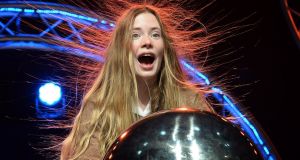 Margot Moore, a first-year student from Loreto Foxrock, at the launch of the BT Young Scientist & Technology Exhibition at the RDS. Photograph: Eric Luke

Students from every corner of the island of Ireland are busy applying the finishing touches to scientific research projects that will feature at the 2018 BT Young Scientist & Technology Exhibition in the RDS, Dublin, this week.

A total of 550 projects made it to exhibition stage this year; the work of more than 1,100 students. A total of 2,031 projects were entered this year from 4,251 students.

As usual, many projects embrace themes around modern lifestyles, particularly digital technology and social media, where projects range from Facebook Depression – Is it Real? to Is Dr Google Making Us a Nation of ‘Cyberchondriacs’?

Diet issues, equality and social pressures on young people feature prominently, as indicated by projects on Invisible Parents, Inconspicuous Children (a study of parent-child separation among the homeless in emergency accommodation); an app to enhance mental wellbeing; and gender-neutral toilets.

On the environment front, a number of projects look at the extent to which microplastics have contaminated Irish aquatic plants and marine species, and at the menace of invasive species, including one on the Coypu, a South American rodent now found in Co Cork rivers.

The research demonstrates students’ resourcefulness – one project is on the production of bioethanol from food waste from the school canteen and another is on the benefits of a glove made of material that is thinner and more durable then latex for use in hospitals.

The quality of the research continues to grow, reflecting the fact that many students now pursue advanced science at second level. One entrant investigates the use of gene technology, known as Crispr-Cas9, to genetically edit a tiny organism known as Paramecium caudatum to purify cholera-infected water in third-world countries. Another group looks at improving the disease-resistance capacity of plants using aspirin.

Sixth-year students Hannah Kinsella and Aoibheann Hayes of Avondale Community College, Rathdrum, Co Wicklow, undertook a qualitative study of students in their school with autism spectrum disorder (ASD), to help them improve their quality of life and to maximise benefit from an ASD unit in the college. They evaluated a range of sensory therapies. “What surprised us is how many [ASD] students preferred music ... and how many students like physical activity to relieve stress,” explained Aoibheann.

Tao Caldwell, Steven Kennedy and Nathan Carballo, of Coláiste Mhuire, Mullingar, were among a number of entrants to look at controversy around vaccination, notably the HPV vaccine, by comparing attitudes among young people living in Ireland and South Africa. They concluded a “fear culture” was more prominent in Ireland, with up to 15 per cent more Irish students having a negative of opinion of vaccination. “This was most striking,” said Tao. “It’s astounding for such a developed country.”

Jenna Brennan and Katie Doyle of Castlecomer Community School analysed HPV vaccine uptake by girls in their school. They sought the views of parents and examined the influence of social media had in people deciding whether to get vaccinated or not.

Less than a handful of female students had not availed of the vaccine by sixth year, although 25 out of 89 parents surveyed said they had not allowed their children to be vaccinated because of a lack of research and supporting information. Among students, social media was not the main influence on their decision, although it’s their main channel for information, Katie observed.

Transition year students Caoimhe Crowley and Eimear Moore of St John the Baptist Community School, Limerick, examined the possible link between late-life depression and Alzheimer’s disease by surveying health professionals. While the link has to be confirmed scientifically, “our eyes were opened on how many people are living with both conditions”, Eimear noted.

Some 60 per cent of entrants this year were female, “indicating the power of this platform to engage female participation in the critical Stem [science, technology, engineering and maths] subjects”, according to Shay Walsh, managing director of sponsor BT Ireland.

The exhibition is in its 54th year and is expected to be attended by more than 50,000 people. It will be open for visitors from 9.30am-5.30pm on Thursday, Friday and Saturday. Further information and booking is available at btyoungscientist.com