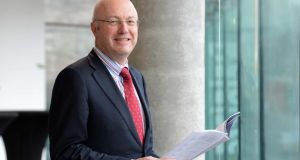 Ireland’s investment in science needs to almost double over the coming years if it is to be able to innovate on the scale required to transform the economy, according to Science Foundation Ireland (SFI).

Speaking at the launch of SFI’s review of 2017 and the research body’s outline of plans for 2018, its director general Prof Mark Ferguson said there was no issue about the quality research being conducted in Ireland. Also, its approach of pooling expertise from different universities was working, but a funding shortfall needed to be addressed.

“It is very, very important for Ireland’s position globally that we continue to do this because other countries are increasing their investment,” he said.

“Under international benchmarking analysis we would predict that we would not hold our position, not because the quality is deteriorating, but because other people are investing more.”

The SFI budget for this year is €172.5 million, but it needs to be increased to €300 million over the next few years, he said. As the country does not have a great deal of natural resources or cheap labour, it needs to pursue innovation.

“We need to innovate more and research is an important part of that,” added Prof Ferguson, who is also chief scientific advisor to the Government.

The scientific research community had upped its game in recent years and was attracting “iconic researchers” with annual salaries allowable up to €250,000. Stars mattered as they attracted good students and collaboration with industry, he said.

How the long-standing issue of overall funding of third level was going be addressed would require “tough political decisions”, he said. More “excellent scientists” needed to be encouraged to consider a career in science teaching.

There was a need for more Stem (science, technology, engineering and maths) graduates, and while science had “got more mainstream”, old perceptions persisted, leading, for example, to a reluctance among young women to do engineering.

Prof Ferguson said Brexit was both a challenge and an opportunity. SFI hopes to sign off on an agreement this year on a joint PhD studentship scheme whereby postgraduates would spend half their time in Ireland and half in the UK. Similarly, a joint professorship programme was being pursued where those appointed would divide their time in a similar way.

SFI is also going to pursue a pilot programme this year for “challenge-based funding”, where people could compete for an award that is open to all-comers, not just universities. It will be in partnership with the American Chamber of Commerce Ireland.

Gender balance remains a crucial issue for the scientific sector, Prof Ferguson said. The problem was one of “seniority”, as the same number of men and women are pursuing postdoctorate research.

SFI had aimed to increase the number of females receiving research awards within its portfolio to 24 per cent by 2020. That figure was achieved in 2016. It is now working towards 30 per cent by 2020. It is targeting its “starting investigator research grant” at women. A total of 44 per cent of applications were from women in 2015, a significant improvement over the previous 25 per cent, it noted.

Ireland is now 11th in global scientific ranking for overall quality of scientific research, according to figures compiled by Thomson Reuters/Clarivate InCites, having broken into the top 10 in 2016-2017.

SFI’s annual plan is available on its website, www.sfi.ie