Shackleton, Crean, Crozier, Hart: Irish names are all over the North and South poles 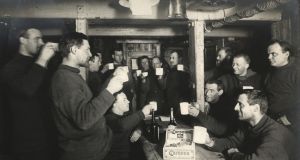 Members of the Imperial Trans-Antarctic Expedition 1914-17, led by Ernest Shackleton, drink a toast to ‘sweethearts and wives’ on board the Endurance. Photograph: Frank Hurley/Scott Polar Research Institute, University of Cambridge/Getty Images

So far, this winter has been colder than the last. Christmas scarves, hats and gloves have already been put to good use. The return to school means the return to nagging children to layer up in the hallway before leaving the house. As you shove hats on reluctant heads, perhaps your own, spare a thought for generations of polar explorers dealing with temperatures a tad below 4 degrees.

For a temperate country, Ireland has produced rather a lot of enthusiasts for the freezing wastes. Ernest Shackleton and Tom Crean are the most celebrated, as both participated in a daring and dramatic rescue after their ship was crushed by ice at the start of an expedition to Antarctica in 1914. Yet there are many other Irish men (and we only know of men) who were involved in expeditions to the North and South poles.

Most Irish participation occurred during the “heroic” period of the 19th and early 20th century through British scientific bodies or the British government. During the 19th century, scientific interest in polar magnetism combined with economic concerns (such as finding a shorter sailing route to the East) drove interest in polar exploration.

As early as 1818, Edward Sabine joined an expedition sponsored by the Royal Society to find the North-West Passage and to study magnetic forces near the North Pole. In 1819 he joined a second such voyage under Edward Parry. The explorers were forced to spend the winter on Melville Island because of ice (it’s minus-23 degrees there as I write this). Francis Crozier, a captain in the Royal Navy, born in Banbridge, picked up where Sabine left off, joining five Arctic expeditions (some also under William Parry) and one expedition to Antarctica (1839-1843). Crozier’s fifth expedition to the Arctic was his last. The party, led by Sir John Franklin, became trapped in the ice in 1846. Franklin died in 1847. Crozier took over and survived until at least 1848 - when he disappeared.

The search for Franklin sent more Irish men into the Arctic including Henry Kellett (twice, in 1849 and 1851) and Robert McClure (on the HMS Investigator in 1849). An Irish man eventually found Franklin. Captain Leopold McClintock (born in Dundalk) led a voyage from 1857 to 1859 funded by Lady Franklin. The party discovered both equipment and human remains from the Franklin expedition, and McClintock published a bestselling account of the voyage. Naturalist Henry Chichester Hart (born in Raheny) and Henry Gore-Booth (of the famous Sligo family) also responded to the call of Arctic exploration. Hart joined the crew of the HMS Discovery in 1875 and collected Arctic flora. Booth funded some of his own adventures where he engaged in sport fishing and the popular polar pastime of searching for lost explorers. (Unusually, Booth found the man he was looking for – he rescued Leigh Smith and his crew in 1882).

In the region of the South Pole, an Irish man is credited with first having spotted what is now known as the continent of Antarctica. Edward Bransfield (from Ballinacurra) sailed from Valparaiso in what is now named Chile in 1820 on a survey of the South Shetland Islands. A number of locations in Antarctica are named after him.

Robert Falcon Scott led two expeditions to Antarctica in the early 20th century that included Irish men. On the second expedition (1910-1913), Scott and a portion of the party lost the race against a Norwegian party to the South Pole. They were slowed by injuries and frostbite in severe cold which reached possibly as low as minus-40 degrees. Tom Crean and Mortimer McCarthy had been part of the supporting crew but survived as they did not join the push to the pole. Crean returned (with Mortimer’s brother Tim) in 1914 with Shackleton. None of the Irish men died of cold. A German submarine killed Tim McCarthy in 1917. Shackleton perished of a heart attack in 1922 and Tom Crean died of appendicitis in 1938.

Ireland’s explorers have left their names all over the two poles: from the Bransfield Strait to Cape Crozier. If thinking of these polar explorers has left you cold, just pull your hat down over your ears and be thankful for overnight lows of merely minus-5 degrees.