Colouring: a rich and rewarding avenue into science 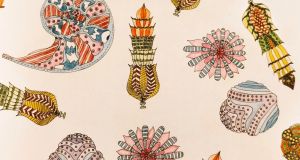 It isn’t a textbook but opens up the world of science: Foraminifera are single-celled protists with shells. Illustrations from Life Under The Lens by Jennifer Delaney.

Who doesn’t love colouring in? No matter what age you are, if you can hold a pencil, marker or crayon then keeping between the lines offers hours of fun, relaxation and artwork for the fridge.

But might the art of colouring in also help people to learn more about science and research? Two recent books of illustrations by Irish authors offer a glimpse of what a blend of art and science can offer the enthusiastic colourist: Journey through the Brain, which artistically portrays structures and concepts about how the brain works and Life Under The Lens, which provides a maelstrom of creatures and plants from land and sea as a canvas for your artistic fancy.

Journey through the Brain

A picture paints (or colours in) a thousand words, and can literally put us in the picture about science and research, according to Dr Lorna Lopez, a research fellow at the Trinity Translational Medicine Institute whose work looks at the genetics of brain conditions.

Until recently, she was a researcher at the Royal College of Surgeons in Ireland working on markers or signals of future psychosis in children and an opportunity arose to get creative about communicating the research through the Health Research Board Knowledge Exchange and Dissemination Scheme

“The HRB was looking for ideas and projects to let people know about the research they fund, and the head of my lab Prof David Cotter asked me to help with that – and one of my ideas was to capture the very popular colouring-book genre – so as a group we worked on how to engage people with a colouring book about the brain,” Lopez says.

While testing out a pilot version of the book on transition-year students, the RCSI group soon found they had to adjust their approach to capture their attention. “They just weren’t interested in having a colouring book, so we changed the emphasis and made the book about a journey through the brain and the colouring was optional,” she adds.

The result was a book of illustrations that portray brain structures and concepts in an artistic and often abstract way. The talent behind the artwork is doctor and illustrator Dr Eoin Kelleher, who graduated from RCSI in 2014 and who drew on his medical education to develop the art in Journey through the Brain. “It was good to have that context,” he says. “If you know a bit about neuroscience, it gives you a skeleton to work off and come up with ideas.”

His experience of developing each drawing varied. “Sometimes you come to it with an idea of what you have in mind, for example I knew I wanted to represent the cranial nerves as a tree,” he says. Then at other times you don’t know what an image will look like, you doodle and brainstorm and then you end up somewhere you didn’t expect.”

Art a key to unlock concepts

Lopez believes the artwork is a key to unlock the brain for a wide audience. “As a researcher, I spend a lot of my day looking at spreadsheets of numbers that reflect what is going on in the brain if you know how to interpret them, but you are never going to engage people with spreadsheets,” she says. “Using imagery, we could instead make the concepts and the complexity of the brain more interesting and engaging. I have seen it work with my own children – my five-year-old was colouring in the hippocampus, which is an area associated with memory and it is shaped like a sea-horse. She now knows that this part of her brain helps her to remember things like her address.”

In many respects, scientists need to be sticklers for accuracy, but for this project Lopez was happy to soften the focus. “When you are trying to get a broad message across, sometimes getting bogged down in the nitty gritty can block that,” she says. “We wanted to get people interested –this is not a text book.”

Life Under The Lens

In a similar vein, the striking book Life Under The Lens is also not a text book. It’s the brainchild of Jennifer Delaney, whose background in marine science had introduced her to the beauty of microscopic beings.

The inspiration to draw illustrations of those minuscule structures came from looking at art-science collaborations on social media, and Delaney hit on the idea to combine her love of science and her artistic talent.

“I wanted to do a colouring book,” she says. “I studied science and I loved drawing and I felt this was something I could do in my spare time.”

In between working part-time as a maths teacher with Youthreach in Donegal and caring for her children, Delaney got stuck into the project, which ultimately bore fruit as Life Under The Lens.

“The book is like an exploration of the microscopic world through colouring, looking at all different forms, bacteria and archaea and plants and animals,” she explains. “It’s to get people to appreciate microscopic life in general, maybe they have never seen it before. I wanted to reach people who might not go to an art or science museum.”

Many of the featured life forms, such as phytoplankton, are important primary producers in the ocean and at the base of marine and freshwater food webs, she adds. “I wanted people to see and colour these beautiful organisms that are affected by climate change. Unfortunately, people tend to only concern themselves with climate change when it directly affects humans so changes in the abundance or distribution of phytoplankton are not of their concern. If this book reaches the non-science community, it will give them a basic understanding of these important organisms, and might ring a bell if they hear them mentioned [in the media].”

The images in Life Under The Lens are part realistic and part imaginative, and Delaney went with the flow of using patterns to decorate and infill the outlines. “They were inspired by the organism but sometimes they are fanciful and exaggerated,” she says. “They are not textbook images, but I was very careful with the accuracy of the accompanying texts.”

One of her favourites from the collection is the cabbage butterfly eggs, and she is also fond of the water-flea, or Daphnia. The most challenging to draw was the gnarly tardigrade, a tough, segmented microscopic animal that can survive all sorts of harsh environments, including extremely low temperatures and travelling into space.

For those with an interest in art and science, Delaney recommends searching for people and projects on social media platforms such as Twitter, Pinterest and Instagram, and she has been encouraged by the reaction to her own work. “A lot of people have told me it is refreshing to find something that is more arty than wordy.”

Journey through the Brain by David Cotter, Lorna Lopez, Eoin Kelleher, Helen Coughlan and Mary Cannon is available for free download through www.rcsi.ie/brainjourney

Life Under The Lens by Jennifer Delaney is available from booksellers, including Amazon.co.uk

Holohan warns of up to 1,000 Covid-19 deaths in January, calls for tighter air travel rules 13:02
Restaurants and bars could stay closed until the end of May, says Taoiseach 13:00
Covid-19 patients in hospital remain at high levels as lockdown extension expected 12:13
Everyone in Ireland to get Covid-19 vaccine by September, Minister for Health says 12:12
Inspector who highlighted mother and baby homes to be remembered through scholarship 11:07