Warming waters have made life in the Arctic much less predictable 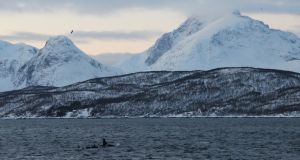 A pod of killer whales swimming in a fjord in Skjervoy, Norway. Photograph: Stephen Starr

At 480km inside the Arctic Circle we are further north than almost anywhere in Alaska. Our journey begins by heading out of Tromso, the so-called capital of the Arctic, and sailing north through a sheltered fjord system on board a high-speed catamaran for 2½ hours. Soon we’re surrounded by snow-covered peaks that stretch 4,000ft high into the frozen air – it’s like a scene from the 2014 film Interstellar.

Our guide, marine biologist Kevin Ochoa, points across the water at a cloud of spray in the distance. “There! A humpback.”

Minutes later a juvenile humpback whale breaches spectacularly 10ft into the air. It draws gasps from all on board. A small group of kayakers braving the sub-zero winds and the whales themselves watch from a short distance away.

Less than a decade ago the sight of pods of humpback whales moving gracefully through the fjords of Norway’s High North in winter was unheard of. But warming seawater, thought to be a result of climate change, means that in recent years fish such as cod and mackerel, preyed on by orcas and humpback whales, are travelling further north than ever before. “There hasn’t been any study yet to show this, but it is clear that warming waters and melting ice are leading to them moving further north,” says Ochoa.

Since a photographer in 2010 became the first to identify humpbacks off the coast of Andoya island in Norway’s Norland county, the species has become a regular sight in the fjords of northern Norway. Now they are venturing into the fringes of the Barents Sea north of mainland Norway, with one researcher identifying more than 900 individual humpbacks in the waters around Skjervoy.

The male ocras, the apex oceanic predator throughout the world, can weigh up to 10 tonnes. In this cove alone Ochoa estimates there may be up to 100 – mothers, fathers, siblings and distant relatives all here to hunt herring.

The humpbacks, fewer in number and appearing on the surface for only a brief moment or two, are not feeding today: at night the herring come up to the surface but during the day dive to avoid the whales.

Though their typical bubble-net feeding, a method of blowing air into the water in a circle to stop prey fleeing, has not been observed here, another kind of remarkable behaviour has been uncovered in the fjords of the High North.

“In this area humpbacks and orcas work together; it is something rarely seen anywhere on Earth,” says Ochoa. “Normally orcas prey on humpbacks, but because there is so much food here there is no need for them to do so.”

But not only has this changed environment led to mortal enemies working together, researchers at the Norwegian Orca Survey and Norwegian Polar Institute have found that “in 94.4 per cent of the feeding aggregations for which the first species was known”, the orcas are allowing the humpback whales to join in and feed on the fish balls they have grouped together.

The long-term impact of these new territorial and feeding habits on species that rank at the top of the oceanic food chain are, as yet, unknown. And no one knows why the orcas are helping to feed what is, under normal conditions, their own prey.

What is less ambiguous is that climate change has made life in the Arctic much less predictable.

Arctic air temperatures are rising at twice the global rate, with Barents Sea water rising .8 of a degree since 1980. Increasingly, erratic temperatures are seeing ice formation take on irregular patterns, often with damaging consequences for wildlife. As a result, whales migrating further north to follow food sources have become trapped by massive winter ice floes, as happened in Canada’s Hudson Bay in January 2013.

It is not only in Norway that warming sea waters may be altering life. In Alaska, experts say orcas are devastating fish stocks commonly harvested by fishermen.

“In many parts of Alaska fishermen often have difficulty harvesting black cod and halibut because of such a high abundance of orcas who have learned to pick off these species from longline [nets],” says Brett Veerhusen, research associate for the Arctic Institute think tank and a lifelong Alaskan fisherman. “They basically have free breakfast, lunch and dinner, and follow the sound of boats from one longline to the next.”

Leviathans such as humpbacks are not the only sea dwellers taking up winter residence in the far north: cod and haddock can now be found in the southern Barents Sea when once its waters were too frigid to support the food they hunt. This may have major consequences closer to home.

Scientists in October warned that cod and herring fisheries around Ireland and the UK may be devastated over the coming decades as fish move northwards. And because cod, haddock and others are not native to Arctic waters, these invasive species threaten to upend local ecosystems, driving Arctic fish such as snailfish and sculpin out of their habitats.

The unfolding effects of climate change are not confined to life in the open ocean. On land, wolverine and lynx numbers have risen in northernmost Norway in recent years. They feed on reindeer herds, a staple food source for indigenous Sami people for thousands of years, and are threatening livelihoods across the Scandinavian High North, leaving herders up in arms.

The Tromso-headquartered Norwegian Polar Institute says that milder winter temperatures are melting snow which then refreezes as ice. As a result, reindeer are unable to reach the grass and lichen they must eat to survive the winter months.

“Other issues related to climatic changes are extreme weather events and shifts in vegetation patterns and seasons, which then do not correspond to the reindeers’ population cycles anymore and are challenging the animals’ survival,” says Doris Friedrich of the Arctic Institute.

On the Svalbard archipelago 750km north of continental Norway, melting ice caps have facilitated the flourishing of a major tourism industry. Visitors on gigantic cruise ships come to experience life at the world’s northernmost permanent settlement and to steal a glimpse of the hundreds of polar bears residing there.

But in the first eight months of last year four bears were shot dead on Svalbard; authorities say normally just one or two are killed every year. Skiers and tourists who found themselves dangerously close to the bears have shot several.

The Arctic polar bear population is thought to stand between 20,000 and 25,000, but as documented by Canadian photographer Paul Nicklen, more and more are starving due the lack of sea ice across the Arctic.

Back in the fjords of Arctic Norway, the unique behaviour displayed by and between the humpback and killer whales may point to how human-induced global warming can change local ecosystems in ways we don’t fully understand, or in ways that have fully played out.

Worryingly, it is unlikely to be the last such case.

1 Majority of Irish Covid-19 cases come from variant that originated in Spain – study
2 Post mortem results on mother and two children found dead in Dublin due on Friday
3 Cork shootings: Father and sons to be buried in two separate funerals
4 Arrest in Spain halts John Gilligan’s efforts to get back into Irish drugs trade
5 The real Contagion virus is out there and it’s causing virologists to worry
Real news has value SUBSCRIBE

IMO to consider ballot for industrial action when it meets on Friday 21:59
Restrictions on religious services to stay after archbishops meet Taoiseach 21:52
Post mortem results on mother and two children found dead in Dublin due on Friday 21:28
Gardaí called in six times over money laundering involving solicitors 21:25
Care home residents asked to pay up to €400 for beds and headboards 20:58