2,500 students from 383 schools are attending the BT Young Scientist and Technology exhibition which has kicked off at the RDS in Dublin. Video: Bryan O'Brien 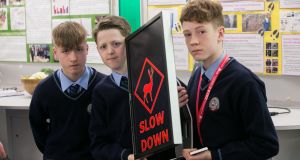 The number of accidents in which deer collide with cars in Ireland is hugely underestimated, students at St Brendan’s College in Killarney, Co Kerry, have concluded.

Combining official statistics on such incidents and their own survey using a crowdsourcing app, they believe they have come up with a more accurate picture.

Their research found that there were more than 101 incidents in the Killarney area in the past five years, with an average of more than 300 collisions a year in Ireland. Most went undocumented unless there was significant personal damage or injury, said Darragh Fleming.

With classmates Colm Looney and Ethan O’Neill, they identified two areas where deer were most frequently to be found in their area: Gortroe in Fossa and Loughitane near Muckross. Motion sensors and cameras were deployed to detect the animals.

The team went on to prove the effectiveness of “cheap deterrents” used in Scotland and the US in the form of CDs hung from trees and human hair (sourced from a local barber and packed into tights). The CD shines when illuminated by car lights while the scent from the hair puts the deer off.

In a third phase of their project, they developed a prototype sign that lights up with different colours depending on how recently deer have been in the area; red indicating to a motorist when they are most likely to face an encounter.

“We believe that all three measures together will reduce collisions,” Fleming added. They are submitting their work to the Road Safety Authority, the local Garda, and Kerry County Council.

A strong public appetite for the introduction of a deposit refund scheme for plastic bottles was detected in a survey conducted by Isabel Byrne and Róisín Kellagher, second-year students at Mount Sackville Secondary School in Dublin.

Of 230 people surveyed, they found 95 per cent were in favour of a scheme whereby there would be a small levy on plastic bottles on purchase; and the sum refunded on return through the use of a reverse vending machine. A levy of up to 20 cent was deemed acceptable, Byrne added.