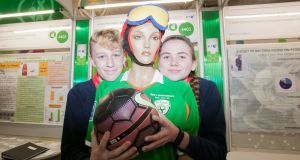 Sam Hendrick (left) and Elle MacHale from Sutton park school with exhibit ‘Investigating the forces transmitted when heading a football’ during the BT Young Scientist and Technology Exhibition at the RDS ,Dublin. Photograph: Gareth Chaney/Collins

A protective headband to reduce the impact of heading a soccer ball on the brain has been developed by two second year students at Sutton Park School in Dublin.

Their plan was the beads would react in a similar way to human brain tissue when experiencing an impact.

“We expected an impact but we were still surprised,” said Elle, “36 per cent of beads were damaged and some were implanted into the gauze. The percentage was shocking.”

Their research was prompted by viewing a BBC TV programme in which English soccer star Alan Shearer highlighted the toll heading the ball was taking on players who were increasingly showing evidence of traumatic brain injury.

They contacted former Irish international forward Kevin Doyle, who retired from the game due to the effects of repeated concussion, and who (along with their teacher Catherine Tattersall) was helpful in offering guidance for their study.

Doyle outlined how his most serious head injuries were following contact with another player or heading the ball from close range, they recalled. They developed protective headgear, which was shown to reduce damage to the aqua beads by 86 per cent, based on an evaluation of 10 repeated “headers”.

It would be unrealistic to suggest the head gear would be worn during matches, said Sam, but they believe its use in training would be of considerable benefit. Professional players have to practice repeatedly heading with the ball coming at them at a speed of 27km/h, he added. The frequency of impacts was less likely to be an issue in a match situation.

Transition year students Aisling Dwyer, Hazel Reynolds and Kiara Hearty of St Joseph’s College, Tipperary, developed a sensor with potential for use on “ride-on” lawnmowers, which they found were responsible for 75 serious injuries a year in Ireland. A total of 1,700 people lose limbs every year in the US because of accidents with such machinery.

They decided to pursue the project after watching The Late Late Show on RTÉ when the famous Kilkenny hurler Henry Shefflin outlined how his son, also Henry, lost four toes when he fell into the path of a ride-on lawnmower.