Higgins calls for science and technology ‘without borders’ 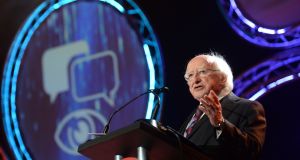 A new generation embracing science and technology has the capacity to address past failures and deliver a better world in spite of great challenges, according to President Michael D Higgins.

In an address marking the opening of the 54th BT Young Scientist & Technology Exhibition at Dublin’s RDS, the President said participating students had the capacity to ensure science and technology brought the best outcomes for all of humanity.

“For someone of my generation that is so, so encouraging,” he said.

Mr Higgins underlined the need for the most innovative ideas in science and technology to be applied to the areas of greatest need and population growth, notably in Africa.

Such an approach would also be essential to meet the great challenges the world was facing, he said. They included a requirement for sustainable development, an urgent necessity to address the causes and consequences of climate change, and the imperative to understand and deal ethically with migration.

“What we are witnessing is a 4.5 billion-year-old planet being placed at risk because of badly thought-out policies that we often haven’t had the courage to correct, or to face.”

The focus, he said, needed to be concentrated on Africa which by mid-century would be the continent with a quarter of the planet’s population, including one billion young people. This also offered a great opportunity to usher in a new form of economics and sustainable development in a spirit of partnership, “rather than seeing it as a problem”.

Addressing the students, Mr Higgins said: “Your contribution to Africa will be to ensure science and technology without borders goes to populations that need it without delay.”

Mr Higgins paid tribute to the founder of the exhibition, Dr Tony Scott, who in 1965 recognised that science begins with curiosity among young people and their great sense of wonder.

Science and creativity should not be seen as opposing cultures, the President said, because “they’re of the same kind”. But, he added, science was not only about discovery, “it’s about what you do with it”.

He highlighted projects in the exhibition on the impact of communications technology and social media, “realising that science is never neutral”. In the past, science had delivered wars – “the great failure of humanity” – and destruction.

If he had one disappointment, Mr Higgins observed, it was the absence of projects embracing ethics and economics.

It was necessary to free up science and technology’s benefits for where they were most needed. “We must get beyond self-interest. We mustn’t have to wait to satisfy all the shareholders before humanity is relieved of infectious diseases, global poverty or malnutrition.”

Mr Higgins said that not ending global poverty was “the great failure of my generation”. There was now a need for a new literacy around economics and science. New thought had to be applied to balanced regional development and addressing the consequences of migration.

The projects that were being presented at this year’s exhibition revealed a new generation with the capacity to do everything in a new and better way for all humanity, and “not just those who consume a product”.

They had the ability to establish a new Ireland that was sustainably balanced in terms of opportunity, population and services.

He paid tribute to the school with the most entries – Kinsale Community School, Co Cork, which submitted 25 projects – and to the teachers who helped participants and the parents who had allowed their “homes to be converted into mini laboratories” to enable their children participate in this year’s exhibition.