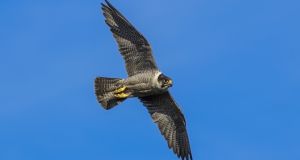 Peregrine falcon: their populations are still recovering from devastating declines in the 1960s linked to DDT, a pesticide, which caused thin eggshells and breeding failure. Photograph: David McNicholas

The peregrine falcon, the fastest bird in the world, is making a slow and steady comeback in Ireland. This is the conclusion from a recent survey of peregrines, which saw over 400 breeding pairs recorded across the country.

Peregrines traditionally breed in rugged uplands and coastal cliffs, but they are moving into buildings and quarries. “They are now present in many of our cities and towns,” says Ryan Wilson-Parr, chairman of the Irish Raptor Study Group (IRSG). One of the most prominent nesting locations is an eyrie on Poolbeg Chimneys overlooking Dublin bay, though they also nest in cathedrals and churches.

Typically peregrines prey on other birds, catching songbirds, waders, pigeons and ducks. “They can strike their prey from above in a stoop dive, at speeds of over 300km/h, knocking them out in mid-air,” says Wilson-Parr. “At Poolbeg, they can drop down 200m off the chimney into a spectacular headlong pursuit of wading birds along the mudflats.”

The survey, which involved the IRSG and the National Parks and Wildlife Service along with 260 volunteers, found a 5 per cent increase in breeding pairs since the last national survey, 15 years ago. They are widespread nationally, but most numerous in mountainous areas in Wicklow and Mayo and coastal areas in Cork, Kerry and Donegal.

Peregrine populations are still recovering from devastating declines in the 1960s linked to DDT, a pesticide, which caused thin eggshells and breeding failure. “Although the peregrine recovery is a conservation success story, protection from persecution is still a concern for the authorities in certain locations,” says Wilson-Parr.

Peregrines hunt doves and pigeons, which has brought them into conflict with racing-pigeon owners. In one notorious incident, a live pigeon was staked close to a peregrine nest in Waterford and laced with poison. The National Parks and Wildlife Service brought prosecutions against four of those involved. Peregrines are legally protected and the service monitors activity at nest sites.

Peregrines are not the only raptor on the way up. Buzzards are a species which went extinct in Ireland during the early 20th century. Eventually, buzzards naturally recolonised the Antrim coast from Scotland from the 1960s, spread through the northern part of the island and down the east coast and then westwards over the last 20 years. They are a conspicuous species, often seen soaring in circles, making a distinctive mewing call while on the lookout for prey such as rabbits, rats and crows.

The overall picture for native Irish raptors is brightening. There could be economic returns too

This is a welcome pursuit. BirdWatch Ireland’s John Lusby says the Irish countryside seems to have higher numbers of crows than Britain, which makes sense because many of Ireland’s top predators have been missing for generations. “This has repercussions throughout the food chain. For example, birds of prey play a role in keeping corvids [the crow family] as well as other species in check,” Lusby explains. “Buzzards feed on hooded crows, rooks and magpies, particularly young corvids, so play an essential role.”

And there are other raptor success stories; red kites and white-tailed eagles have been successfully reintroduced by the Golden Eagle Trust. Golden eagles themselves have fared less well, but there is hope that they will hold on.

But all is not rosy for raptors. The hen harrier is an upland bird-of-prey whose numbers have halved in recent decades and which still struggles, even within Special Protection Areas for its conservation. The barn own is not in rude health either; its populations were impacted by changes to farming and possibly rodenticides. And there are also gaps in our knowledge. Ireland’s smallest bird of prey – the merlin – is so difficult to survey that we know little about its population.

Similarly, the sparrowhawk is a common species, often seen in gardens, yet it is such a secretive bird during the nesting season that numbers can only be guessed at. The other most common raptor is the kestrel, often seen hovering motionless over field verges, watching for rodents. Recent evidence from BirdWatch Ireland hints at a slight decline in this falcon.

Still, the overall picture for native Irish raptors is brightening. There could be economic returns too. Birds such as red kites and white-tailed eagles can be big draws for ecotourists. And we may yet add to our stock. The Irish Raptor Study Group is keen on a feasibility study to reintroduce the osprey into Ireland. The males – who initiate nesting – rarely disperse far from the colony. This makes it unlikely they will cross over from Scotland in the short term.

“The osprey is the UK’s top bird-tourism species and could similarly be a huge success in Ireland,” says Wilson-Parr. They are large, conspicuous birds, easily observed and often seen in natural history programmes plunging into lakes to catch fish before carrying their quarry off in their talons.


Elusive merlin – Tracking a small, but feisty falcon
Ireland’s smallest bird of prey is the merlin. It is secretive and scientists are still figuring out how to survey it. “It has the highest level of protection but arguably the bird of prey we have the least information on,” says researcher John Lusby at BirdWatch Ireland.

Merlins are feisty. Lusby has watched merlin over Connemara bogs attack far larger species such as white-tailed eagle, heron and raven that ventured too close to their nesting site. Merlin catch smaller birds such as meadow pipits and skylark, sometimes after a prolonged chase.

In 2010, a pilot survey of merlin discovered that trained surveyors came back with different results and the survey method was unreliable. Since then, Lusby has studied Irish merlins to better understand them. A scientific paper he co-authored with University College Cork in December reported on more than 300 nesting pairs over the past 30 years. Previously, merlin tended to nest on the ground in heather. This has changed; all but one of the pairs nested in trees. Mostly, they preferred to nest at the edge of conifer plantations, beside moors and heathland.

Lusby and Dermot Breen of the National Parks and Wildlife Service have spent days tracking through Connemara boglands, where the diminutive hunter nests on islands among the hundreds of lakes. Often the best way to locate merlin is to search for plucking perches: a large boulder, turf pile or fence post, on which they habitually pluck their catches.

“The islands are densely covered in holly, oak, yew and rowan and the merlin nest in the trees there,” says Lusby. It is painstaking work and the birds switch nest site every year. “It can be soul destroying spending days looking for them on the bog, but very rewarding when you do find a pair.”

Lusby hopes his fieldwork will pay off and Ireland will be able to count our merlin population. They mostly reside in remote upland areas of Wicklow and Donegal as well as Connemara. In winter the falcons tend to drift down to coastal areas, offering the best opportunity for the rest of us to spot these agile hunters.