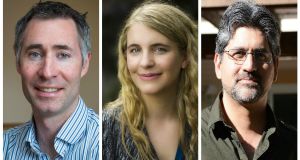 John Regan, Aoife Gowen and Anil Kokaram are among the scientists in Ireland to have benefited from Marie Sklodowska-Curie Actions

The EU funds dozens of initiatives that support scientific research but few have the overall impact of the Marie Sklodowska-Curie Actions. These have literally changed lives, affecting the careers of young scientists across the EU, including Ireland.

The Marie Sklodowska-Curie Actions were set up in 1996 and have just reached their 20th anniversary . There is a great deal to celebrate.

The programme expects to fund its 100,000th fellow during this year. Hundreds of Irish researchers have been supported by the Actions and it has made a big difference here, says Dr Jennifer Brennan, the Marie Sklodowska-Curie national contact point for the Actions.

“The programme has been really important for Ireland because it funds all research areas,” she says. “Some of the national funders are about prioritisation but we will fund everybody.”

It is also a programme that gets results for our participants, suggests Prof Orla Feely, who is chair of the EU advisory group on the Actions and vice-president for research, innovation and impact at University College Dublin.

“Ireland has been enormously successful in the Actions. The graphs put us up at the top for success rates, one of the most successful countries in Europe.”

Originally the Actions were a mechanism for supporting researcher mobility across the EU, particularly for Masters, PhDs and post docs. “At its heart it is a mobility programme that encourages an open market for researchers in Europe,” says Dr Brennan.

“But that has changed into a programme that has a strong focus on career development for researchers.”

It showcases the opportunities they can pursue to develop a substantial career “either inside or outside academia”, Dr Brennan says.

“It opens up career possibilities for them, shows what graduates can do with companies.”

Receiving Marie Sklodowska-Curie Actions funding is also an indicator of quality. “It is a very prestigious programme to get involved in,” she says. “They tend to go on and develop as leaders in their fields so it is important from a talent point of view.”

It has a €6.2 billion budget under Horizon 2020 and there are a number of award categories. There are individual fellowships for young researchers, allowing them to pursue their work anywhere in the world. These offer about €100,000 over two to three years.

The research and innovation staff exchange programme brings together a collaborative consortium which in turn funds exchanges between participating partners. Funding here would range from €300,000 up to €1 million.

The innovative training network brings companies and academics together in support of real-world training for up to 15 PhD students, who exchange between members. Funding here ranges up to €4 million.

There are other programmes but all are designed to open up opportunities and options for researchers. More information is available from Dr Brennan, Ireland’s national contact point, at iua.ie/mariecurie

Aoife Gowen, associate professor in the school of biosystems and food engineering at University College Dublin

“By the end of the fellowship, I had developed a concept of using hyperspectral imaging to explore how the human body interacts with biomaterials,” she said.

“This formed the basis of my successful application for the highly sought-after European Research Council Starting grant in 2013,” Dr Gowen said.

She used the funds to set up an imaging lab at UCD using the technology.

Dr Gowen is also one of eight leading women scientists to appear in a painting for the “Women on Walls” initiative organised by and displayed at the Royal Irish Academy.

Dr Regan has only begun his two-year Marie Sklodowska-Curie Research Fellowship last October, and is based at DCU. His astronomical research relies heavily on the use of some of the world’s most powerful computers.

“My research revolves around understanding how the very first super-massive black holes in the universe may have formed,” he explains. He uses computers “to model the formation of the very first seeds for super-massive black holes”. He will use local supercomputers at ICHEC, the Irish Centre for High-End Computing. “The simulations run on some of Europe’s largest supercomputers and I’ll be leveraging ICHEC’s largest supercomputer, Fionn, for this work over the coming years.”

The awards “are a massive shot in the arm to any academic CV and they come with generous research funding”, he says. “It has given me huge confidence in my scientific ability. The goal now is to build on the award and break new ground in theoretical astrophysics.”

Anil Kokaram, professor and head of the Department of Electronic and Electrical Engineering at Trinity College Dublin and head of research group Sigmedia

Prof Kokaram hit the headlines in 2007 when he shared a technical Academy Award with London-based company The Foundry. The work involved visual special effects, with the technology later used in films including X-Men, The Da Vinci Code and Charlie and the Chocolate Factory, amongst others.

Some of the earlier work leading to the Oscar was supported by the Marie Sklodowska-Curie Actions, with PhD and post-doctoral students involved in “Research Training Network” and “Knowledge Transfer Projects” under the Actions.

Prof Kokaram views the Marie Sklodowska-Curie Actions programme as hugely important. “It is one programme in the EU framework that actually funds research. The whole thing there is about training,” he said.

“These are brilliant for training PhD students, giving them a well-rounded training in technical communications, as well as the technology itself.”

Industry-directed research expects “deliverables”, he says. “But with the Marie Sklodowska-Curie you can really kind of go crazy and have people study things that might have an impact in five years. The key thing is to give them the tools to communicate.”