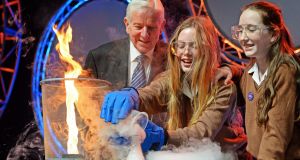 The benefits of the BT Young Scientist & Technology Exhibition (BTYSTE) go far beyond the classroom or the school science lab, according to cofounder Dr Tony Scott.

Speaking in advance of the 56th staging of the event this week, he said the contest has had a major impact on numbers going on to study science subjects – and on Irish innovation and entrepreneurship. This was reflected in winners who have gone to form major companies – some on a global scale informed by cutting-edge research.

Equally, its success in prompting women to embrace science, technology, engineering and maths (Stem) stood out, he added. The Young Scientist event had also played its part in improving mathematical ability.

In the past there was constant bemoaning Irish students were so poor at maths – the evidence of change was reflected in the work of recent winners, including projects on quantum physics and computer encryption.

More than 1,800 projects were entered into this year’s contests, while 550 finalists from 244 schools will showcase their entries at the RDS in Dublin over coming days – the 20th year of sponsorship by telecommunications company BT.

Projects on climate change and mental wellbeing dominate 2020 entries, while almost 60 per cent of 1,125 students whose work will be exhibited are female.

Dr Scott’s role includes shortlisting entries for the chemical, physical and mathematical sciences section, which invariably starts with him remarking to himself: “that sounds interesting, how did they do that?”

On talking to entrants on the exhibition floor, he said, “you realise what they have achieved. Over the years it’s astounding really”, while their ability would leave him at their age “behind the door”.

The standard has consistently improved but also the ability to communicate their research and to present it in a compelling way. In the current era, if one cannot communicate the work, it risks being useless, Dr Scott said. That verbal skill, he acknowledged, was not only important for science but also to counter fake news and anti-science viewpoints.

His fail-safe approach in evaluating projects face-to-face, however, still works: “What did you set out to do? How did you do it? What did you find?”

While the number of women participating in science is part of the success of Young Scientist, which is also reflected in winners, the mission he and cofounder Fr Tom Burke had in the 1960s was “to get young people to realise science is not confined to the science lab or the classroom”.

It may be primarily about the science, but fun and friendship had to be essential elements too, he noted.

The immense contribution to innovation and business is reflected in many recent winners, Dr Scott said. 2017 winner Shane Curran (19) is an entrepreneur and founder of evervault, which is developing a cloud-based secure processing product designed to improve how apps manage privacy.

Patrick Collison, the 2005 winner, went on with brother John to form the payments company Stripe, while the 2015 winners, sisters Annie and Kate Madden, founded FenuHealth a global enterprise that produces natural feed for horses to reduce risk of gastric ulcers.

The stand-out thing about the winners was “they are not pushy or standing waiting for glory”, Dr Scott said. They were proud of what they achieved, and many come back to assist with judging the next generation of entrants.

“I’m always delighted, I can call them my friends.”

The Young Scientist event is open to the public on Friday and Saturday (from 9.30am) – more information and tickets are available at btyoungscientist.com