Politicians should be sent to space, says Prof Brian Cox 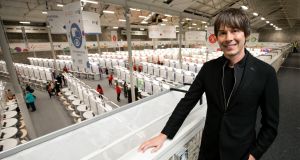 Sending politicians to space, even for just five minutes, to ensure they get a better perspective on the world, on its value and vulnerability, should be part of the imminent era of space tourism, according to cosmologist Prof Brian Cox.

Speaking at the BT Young Scientist & Technology Exhibition (BTYSTE) in the RDS, the renowned science communicator said he was very familiar with the Blue Origin and Virgin Galactic programmes which are developing commercial space travel. He was persuaded by the merits of getting people into space, even if it is only as far as the suborbital zone around the planet.

The more people that see the Earth from space, “the more they understand this place; not just its value as our home, but it’s potentially extremely valuable on a rather larger scale”. This was because complex life may be quite rare with the distinct possibility “there may be only us, locally, in this [Milky Way] galaxy” of more than 200 billion stars.

While it might seem almost naive to say, “if we use this as a working hypothesis, it forces us to value this place rather more than we do”, he added.

Part of the problem with communication about climate change was that “we feel too small to have an influence on a world like this, when science tells us this is not the case”.

“We are actually quite powerful. This is where complex life and intelligence exists; where atoms have come together to think.”

When coupled with understanding that there are very few places like this, “you can see the motivation for action”, Cox noted.

As for politicians, he said “the more we get up there, just to take a little glimpse, that five-minute trip to see the Earth, the better chance of success” in protecting it and in addressing threats such as climate change.

The experience of space underlined “the need to advance knowledge, provide sustainable energy and understand nature in a better way”.

The physicist said he was in awe of the “distributed excellence” demonstrated by schools from all over Ireland participating at the BTYSTE. Thousands of engaged, capable students were excited about science, technology and engineering; “one of the necessary foundations of our economies and societies”.

He realised this was a product of long-term investment in education and hoped the model would be replicated in the United Kingdom. He was amazed, in particular, by entries that embraced quantum computing; a profoundly-promising, transformative technology that was notoriously complex, yet had the potential to generate immensely more powerful computers than exist today.

“It fascinates me. I want to see what they are doing.”

Speaking later at the BTYSTE opening, he told the students, “the level of research you have achieved – from blackhole collisions to recyclable plastics – is quite stunning to me”.