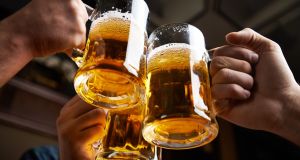 The creation of new sources of protein is a global priority as world population moves closer to the 10 billion mark and food production comes under increased strain due to the effects of climate change and a decline of nature systems.

A new generation of protein-rich foods is set to emerge soon, and would mark a significant, and somewhat controversial, move away from dairy and beef products – which currently dominate Irish production.

If successful it is likely to also lead to a dramatic change in human diets, especially in the developed world.

A team based at University College Cork (UCC), working in partnership with Teagasc, pasta giant Barilla, brewer AB InBev, Glanbia Ireland and other international partners, expects to have a new range of vegan foods and ingredients on the market by 2025.

The Smart Protein Project, the only one of its kind in the world, will use byproducts from beer, pasta and bread-making such as crusts, spent yeast and barley rootlets. These will be combined with fungi to create single-cell proteins. These microproteins, which are cheap, easy to produce and need minimal natural resources, are to be mixed with other plant proteins derived mainly from fava beans, lentils, chickpeas and quinoa.

The vegan foods ultimately produced are expected to include alternative meats, seafoods, dairy products and infant formula – all items consumers indicated they lacked in purchasing options when surveyed by the project team.

In total the initiative involves more than 30 partners in 21 countries. It will begin work this month with a budget of €9.6 million, of which €8.2 million is European Commission support via Horizon 2020 research funding. The rest comes from industry partners.

The team is being led and co-ordinated by food scientist Dr Emanuele Zannini based at UCC’s school of food and nutritional sciences. “The combination of plants, fungi and microprotein ingredients will allow us to develop an innovative, highly nutritious range of food and beverage products that will appeal to consumers, particularly meat eaters and flexitarians, in terms of structure, flavour, taste and price,” he believes.

One of the team’s key challenges, he adds, will be to better understand the functionality, structure and biology of protein.

“It’s basically a reverse engineering project. To work backwards from what we have in terms of animal proteins, to look at the building bricks of those. And then to rebuild using new bricks from plants and micro-organisms in yeasts, mushrooms and mushroom byproducts.”

At the same time researchers must ensure the proteins are cost effective, use local materials and do not compromise human gut microbiota; “what we now call the second brain”, says Zannini.

“We have to take all our learning out of the lab and make sure it can be applied on an industrial scale. That’s why it is so important to be working with major food industry companies as partners.”

The partners are also the source of raw materials. Known for pasta-making, Barilla is an industrial baker. Its inputs will include crusts and wheat bran. Those will be used to create “growth medium” (a nutritious liquid) for the microprotein fermentation process, says Barilla food engineer, Ricardo Giancarlo. “And we will be doing the southern European market product tests for the new ingredients in our pastas, breads and sauces.”

AB InBev will provide spent yeast and malt rootlets that will be used, respectively, as a microprotein source and for texture.

On the plant side, crop trails in Ireland and Portugal will be managed by Kilkenny-based plant specialist Beotanics. “We are the agronomy lead for the project. No pressure,” said Beotanics chief executive and founder Pat Fitzgerald.

“We’ll be managing that in two different climates,” Fitzgerald adds. The commercial-scale tests will involve quinoa, lentil and fava beans in Ireland, and chickpeas, lentils, quinoa and fava beans in Portugal.

Beotanics, which employs about 100 workers in Ireland and Portugal and is in the midst of a €1 million expansion, was invited to join the project thanks to its international experience in exploiting opportunities from new crops. Those include yacon, wasabi, sweet potatoes and, more recently, yam and taro.

Outlining Teagasc’s role, Prof Catherine Stanton says she and colleague Prof Song Miao will be looking at the sensory acceptance (taste, texture, smell) and health benefits of the smart protein foods and ingredients, and comparing them to existing products.

“For example, comparing a smart protein-based protein powder with an existing whey-based one to see that it’s as good as, or better, than the original in all aspects. From taste and structure to the nutrient bioavailability.”

Glanbia Ireland was somewhat tight-lipped about its role. An emailed response said the project was an opportunity to access “world class research” that complements its gluten-free oat investments and ongoing research into premium grains and Andean quinoa.

Bord Bia declined to comment on what it would mean for Ireland’s food leadership position globally, especially in dairy and beef sectors. In an emailed response, meat and livestock sector manager Joe Burke said: “EU Commission research suggests Irish milk has the joint-lowest carbon footprint across all of the member states, and that Ireland has the fifth lowest emissions per kilo when it comes to beef.”

Reaction in farming quarters was stronger. General secretary of the Irish Cattle and Sheep Farmers’ Association Eddie Punch wonders why the EU “would put funding into an Irish research project when its outcome is to undermine the very livestock farming which utilises our abundant rain and capitalises on our ability to grow grass”.

Punch adds: “The notion farmers could make money growing protein crops or other plant-based foods is a dubious one.”

He further suggested sluggish beef demand and current low prices (about €3.45 per kilo as opposed to a viable €5 per kilo) might partly be linked to “anti-meat propaganda”.

This year dairy cows will give birth to some 800,000 male calves that are of relatively little value

Off the record others in the farming sector were even more critical, with some asking if the project is part of a plot against beef and dairy. It is hard to ignore the fact smart protein is about to land at a time when the high-volume farming required to meet consumer demand for cheap animal protein products is increasingly in the spotlight.

While environmental criticisms, particularly as a consequence of the expanding national dairy herd (currently at 1.6 million head) are dominating discourse about the future of agriculture, a welfare issue is also being raised – the so-called “calf tsunami” whereby this year dairy cows will give birth to some 800,000 male calves that are of relatively little value.

Properly caring for so many young animals, most of which are removed from their mothers almost immediately after birth, is a challenge in itself. Farming and welfare organisations fear that could be exacerbated by falling commercial demand for the bull calves.

“About 40 per cent of male dairy calves had been going to the beef industry, but prices have collapsed and demand is very low,” said Teagasc senior animal welfare research officer Dr Laura Boyle.

Calf welfare is “a huge issue for the dairy sector, its farmers and consumers”, she adds. The other outlet – live exports – is compromised too by saturation, logistic and welfare issues. Moreover, Boyle points out there is the risk ferry companies will limit or refuse calf shipments because of consumer concerns.

“Is it sustainable to have this many male calves? No. Are the levels of lameness and mastitis [in the dairy herd] acceptable? No. Farmer welfare is that good? No. And all of that is in a context where dairy profits are reported to be down 28 per cent in 2018.”

Replying to suggestions smart proteins might seem anti-meat or dairy, Zannini says researching new ways to produce food from microbes and plants was “not against anything”.

Instead a key goal is to offer farmers “an innovative, plant-forward, economically and environmentally sustainable business model that helps them diversify production systems”. No more, no less.