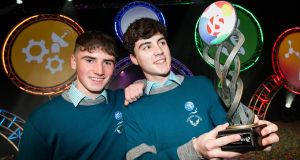 Cormac Harris and Alan O’Sullivan of Coláiste Choilm in Ballinchollig developed “an impressive education programme” to counter gender stereotyping in response to their findings.

The winners receive €7,500 and will represent Ireland at the EU Contest for Young Scientists later this year.

This is the second time Coláiste Choilm has had the overall winner of the competition, its previous win being in 2018.

The 16-year-olds were given their prize by Minister for Education Joe McHugh and BT Ireland managing director Shay Walsh at a ceremony in the RDS, Dublin on Friday night.

Despite awareness of the lower percentage of females relative to males pursuing study and careers in science, technology, engineering and mathematics, “we still do not understand exactly why this is the case,” said head judge in the category Prof Joe Barry.

The students set out to determine how early gender stereotyping could be identified by conducting workshops with 376 five to seven-year-olds from a range of school settings, with tasks including choosing between gender-specific and gender-neutral toys; drawing and naming an engineer, and rating male and female competency at a number of gender-specific roles.

One striking finding was that 96 per cent of boys drew a male engineer, while just over 50 per cent of girls drew a female engineer. “This, along with the other data, indicates that gender stereotypes emerge in young children and they are particularly strong among boys,” Prof Barry said.

The findings were also important as intervention typically focuses on girls. “The project recognises the need to focus on all children, boys and girls, from a young age, in order to combat the development of gender stereotyping.” They also created “pertinent and usable resources for primary school teachers to combat gender stereotyping among young children”.

“The gender bias we found was so big, we decided to see if it is already prevalent before children go to school,” Alan explained.

“Among the most striking findings was girls had a more positive view of boys’ abilities, than vice versa,” his colleague Cormac added.

Their entry was in the intermediate section of the social and behavioural sciences category.

With statistical analysis increasingly part of the secondary school curriculum, it has led to stronger entries in this category, according to judges.

Oscar Despard (17), a fifth year student from Sandford Park, Dublin, won the individual award for his project on “Applying Data-Driven Experimental Analysis to the Irish Longitudinal Study on Aging”.

His project focussed on LDL-cholesterol, often described as “bad cholesterol”, and concluded it plays a role is countering atrial fibrillation (AF) which leads to irregular heart rate that can increase risk of stroke and heart failure. “The research, somewhat unexpectedly, suggested a possible beneficial effect of LDL-cholesterol,” he said.

“This exceptional young researcher took a new perspective on a global problem and has brought new insights,” the judges found.

They “delivered a fully-functioning, integrated technological solution at a level beyond their years”. The image-recognition system has the potential for accurate waste segregation in a domestic setting. The judges recognised its potential commercial application as it fixes a significant challenge of incorrect waste segregation.

“We have had a lot of people taking pictures of it,” said James, “So we will have to patent it when we get home.”

Individual runner-up award winner was Ava Hynes (14), a second-year student at Coláiste Treasa in Kanturk, Co Cork, who analysed the impact of smartphone use on adolescents. She collected data from 792 post-primary students aged 12 to 19, focussing on levels of social anxiety, social phobia and adolescent loneliness related to smartphone usage.

Mr Walsh of BT Ireland said: “For more than five decades, the exhibition has shown the ingenuity of Ireland’s youth, and this year is no exception. The students have sought creative and innovative solutions to some of the world’s most pressing issues, and that spirit and drive is to be commended ... from young students involved in the Primary Science Fair to secondary students at the BTYSTE, it is vitally important that every student’s voyage of discovery does not end here.”

Mr McHugh said he was particularly pleased to see “so many young people tackling some of the most important issues facing us, from climate change to health, to technology, ethics and societal change,”.