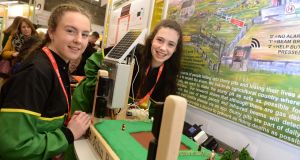 Rebecca Murphy and Abbey Hehir from Clare, with their slurry pit project, at the opening of BTYSTE in the RDS. Photograph: Dara Mac Dónaill

Slurry-pit accidents take a terrible toll on Irish farms, with an average of four to five people dying every year due to inhalation of toxic fumes, but a device using infrared beams and mobile phone technology offers hope of a solution.

The system developed by two secondary-school students from Co Clare, and entered in the BT Young Scientist & Technology Exhibition, is a marked improvement on current devices, they believe – and has the potential to be generated for as little as €120.

Both Abbey Hehir and Rebecca Murphy, who attend St John Bosco Community College in Kildysart, are from a farming background and are so convinced of the viability of their device that they are taking out a patent on it.

Once a laser beam surrounding a pit, where farm wastes are stored, is broken by someone approaching close to it, an alarm is triggered on the mobile phones of others in the vicinity connected via an app. These can be farmers, family, friends or neighbours. The system, which is powered by solar energy, can be used where there is no internet through the use of computer hardware known as a dongle, Murphy explained.

“Our research shows that although there are gas detectors for slurry pits, our device with the use of solar panels and infrared beams is very good at detecting anybody coming near the pit, and alerting mobile phones via an app,” Hehir added.

The second-year students were conscious of how food waste adds to climate change, and wanted to find a better way to dispose of waste generated in their school while creating a renewable energy source.

Having researched other devices they added “a salt bridge” in the form of an agar solution carried in a plastic pipe connection; this helped maximise the amount of electricity by increasing the number of ions created – a process critical to power generation.

Kearney expressed regret that their device did not perform as well as they hoped. “But it’s scalable. A bigger device will generate much more electricity,” he stressed.

The food waste issue prompted Rachel Coburn, Ella Foley and Nicole Murphy of Coláiste Choilm in Ballinchollig, Co Cork to investigate how different organisms can be used to accelerate decomposition and enhance the quality of organic fertilisers.

For their research the fourth-year students sourced a large volume of woodlice, worms and slugs from the natural environment. Woodlice generated the most compost but outdoor slugs produced the best quality in terms of phosphorous and potassium levels, Coburn confirmed.

It has been estimated that Irish households lose up €1,000 a year on food waste, so the girls hope to develop a special bin to maximise yields and savings, “and we hope too it might generate some money for us”, Foley added.

The BTYSTE opens to the public on Thursday and continues until Saturday, details at www.btyoungscientist.com.