‘You remind us of what can be achieved when we turn those ideas into action,’ says Taoiseach 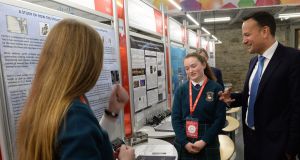 The Government’s ambition is not only to nurture talent in science, technology, engineering and maths (Stem), but especially to tackle inherent gender bias in these critical areas of research, Taoiseach Leo Varadkar has said.

Opening the 2020 BT Young Scientist & Technology Exhibition at the RDS in Dublin on Wednesday, he said he found it reassuring 60 per cent of participants present were female “because it shows that our strategies are helping to bring about the change our society needs”.

Paying tribute to the students’ imagination, determination, and vision for a better future, he said the exhibition was an Irish gathering of world-class research and ingenuity.

“It also makes me feel a little inadequate,” he admitted. When he was at school, “we were not as clever, and certainly not as confident, and none of us had patents”.

The exhibition underlined action mattered as well as ideas, said Mr Varadkar. “So many of us have good ideas that we let wither and die. You remind us of what can be achieved when we turn those ideas into action.”

“Over 1,000 students, over 500 projects, over 200 schools” represented the innovators, entrepreneurs and leaders of tomorrow. With climate change being the dominant theme, young people understood intuitively so many of the solutions to it were going to be new technologies, he said.

With more than 50,000 people due to visit the exhibition this year, “it’s a remarkable tribute to the quality of your research and a testament to the way the exhibition is run.”

He singled out projects suggesting change is coming. “I commend Loreto Secondary School, Balbriggan, on their investigation of whether confidence affects their interest in pursuing a career in Stem; Lanesboro Community College, Longford, on whether gender drives subject choice at senior cycle and beyond and Naas Community College on whether females drop out of sport earlier than males.”

He also welcomed research by St Mary’s Secondary School, Glasnevin in Dublin, on “how we can shift Ireland’s cultural perception and participation of women in sport”.

He welcomed younger people participating in the Primary Science Fair in coming days. “The calibre of projects you are producing leaves me in no doubt that you will be challenging to win the young scientists’ exhibition in a few short years.”

Minister for Education Joe McHugh paid tribute to student efforts to make the life of their peers easier, by for example devising ways to counter cyberbullying. But increasingly, he said they were showing leadership in addressing wider issues facing society and providing “road maps for our generation” on how best to tackle them.

While a survey had shown some 80 per cent of participants at the exhibition go on to study some form of science or engineering at third level, they endeavoured to increase diversity with competition judges and alumni going out to Deis disadvantaged schools and those who have never participated. This approach was achieving results, he added.