BT Young Scientist: What does it take to find a winner? 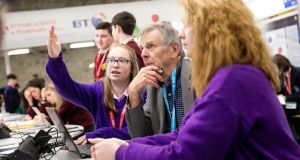 Just as there is a small army of volunteers without whom the BT Young Scientist & Technology Exhibition (BTYSTE) would be impossible to stage, there is a band of almost 80 judges who play an essential role in evaluating entries.

Some, including past winners, have been judging on a voluntary basis for up to 40 years.

The process is both hectic and exacting as the judges across four categories identify the most significant works and check for originality and application of scientific standards.

Judging is very thorough but not confrontational, explains Prof Pat Guiry, a chemistry professor based in University College Dublin who is now in his 22nd year of judging the chemical, physical and mathematical sciences category.

Potential prize winners are subject to even more extensive examination in the final hours of the contest by a wider range of judges in a system that is proven for its effectiveness over many years in identifying high-calibre winners.

Not only have standards and communications skills improved over the years, entrants have become much more confident and are not afraid to embrace research across a range of disciplines, Prof Guiry notes – besides “growing three inches during the exhibition as they meet judges and members of the public”.

People still do pure science by, for example, testing their local river for heavy metals, he points out, which remains one of the beauties of the competition. In such circumstances, it means a lot to them and to their locality – and even better if the work has a global dimension.

As a chemist, he notes there are relatively few pure chemistry projects nowadays, while in contrast there are more entries in physics, and maths where all you need is “a pencil, paper and a good head”.

About 100 projects are in his category which he believes is a strong entry, which takes in those overlapping with technology and other disciplines.

Many projects need instrumentation and some schools simply do not have the necessary equipment. Guiry praises the many third level institutions which help out in that regard. Entrants run the tests and do the analysis, he stresses; universities and ITs facilitate this – any help must be recorded in the entrants’ project notebook.

Above all, the quality of work has improved immensely, Guiry believes, which is greatly assisted by shortlisting of almost 2,000 projects in the autumn, where qualifiers are selected.

The trend towards projects on climate change shows students are very enthusiastic about the planet and want to contribute to understanding issues about its wellbeing, Guiry adds. “They want to do research into carbon footprint and to understand what it is.”

In contrast, “people often talk about it and don’t really know what it is, as they drink their orange juice from South Africa in preference to apple juice from Wicklow”.

Dr Yseult Freeney who lectures in organisational psychology at Dublin City University began judging 14 years ago. “It’s such a wonderful event to be part of every January,” she adds. She would never miss it, as indicated by her participation four weeks after her first child was born, which coincided with her becoming head judge in the category in 2014.

Young people have become much more concerned about social justice, “and doing good through their research”, she says. Moreover, their research abilities have improved and they have become more critical. Topics mean so much to them, that are passionate about their work and motivated in trying to find solutions.

She says the judging process is intense because of time pressures, with some heated discussion, especially at the final stages when they go beyond their own areas in identifying winners. “Judges are so concerned about getting it right and doing justice to the students. It’s a huge responsibility.

“We want to celebrate achievement, and that the right student gets recognition for the right project,” she says.

Freeney believes there is increased appreciation of the importance of the social and behavioural sciences, and understanding that the world does not operate on the basis of one scientific discipline. Critically, so many global problems are human-driven. The category is the most popular among students, she points out, and yet they get so little training on it at second level.

The winners of the 2020 BTYSTE will be announced on Friday evening.