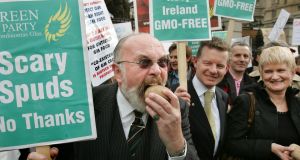 Genetically modified organisms (GMOs), including genetically modified food (GMF), are rarely out of the news. The US National Academies of Sciences, Engineering and Medicine recently released an in-depth report – Genetically Engineered Crops (2016) – concluding that genetic engineering is no riskier than older methods of genetic alteration. But, on July 10th last, the Irish Cabinet adopted a proposal to “enable Ireland to prohibit or restrict the cultivation of GMOs in Ireland”. There is a yawning gap in Europe between the position of the majority of scientific experts on GMO/GMF and public/political opinion.

The EU has also published a report entitled A Decade of EU-funded GMO Research, 2001 - 2010, summarising results of 50 projects funded by the EU to the tune of €200 million. The conclusion is that there is no scientific evidence to associate GMOs with higher risks to the environment, or for food and food safety, than conventional plants and organisms.

The traditional way to produce improved varieties of plants or animals is by crossbreeding different varieties. Genetic engineering has been used since the 1980s to make GMOs. A GMO is an organism whose genetic make-up has been deliberately altered in a specific manner, usually by inserting a single, or a few, known genes into its genome from another organism. Genetically modified (GM) crops resistant to herbicides and to pests have been produced in this manner.

Those who are opposed to GMO/GMF claim that traditional breeding methods are natural and produce more predictable and safer outcomes than genetic engineering, but science does not bear this out. Of course, unpredictability is inherent in any biological process and is not exclusive to genetic engineering. Conventional crossbreeding can also produce dangerous crops, for example the potato Lenape, bred in the 1960s because it produced great golden chips. Unfortunately, this new potato also produced high concentrations of the natural alkaloid solanine and induced severe nausea when eaten.

In fact, genetic engineering techniques are less likely to make such a mistake because usually only a single known gene is transferred. And even if an unforeseen negative consequence occurs, all new crops are rigorously tested before release and any potentially hazardous product is removed.

Criticism of GMO/GMF comes mainly from the environmental movement, known popularly as the ‘greens’. They have been criticised for falling for the ‘naturalistic fallacy’ – everything natural is good and everything unnatural is bad. For scientific evidence, the greens quote the opinions of a small minority of scientists who don’t accept the effective international scientific consensus on GMOs. The greens are situated firmly to the left of the political spectrum and are also intensely suspicious of the capitalist corporations that have developed GM crops.

The greens have lost the scientific argument that GMO/GMF are inherently dangerous to health and the environment and now concentrate more on criticising big corporations for patenting GM seeds and for charging high prices. These criticisms may be well-founded but of course traditional hybrid crops are also patented and also expensive.

GMO/GMF has the potential to reliably feed the ballooning world population and science finds no reason to predict that this is a riskier option than more traditional methods. GMOs can also protect the environment. For example, UCC lecturer in plant biotechnoogy Dr Barbara Doyle wrote in a letter to the Irish Examiner recently: “. . . in 2016 alone, fewer insecticide sprays [because of the use of GM crops] resulted in a reduction of 26.7 billion kilogrammes of CO2 emissions, which is the same as removing 11.9 million cars off the road”.

Green criticism has undermined public and political confidence in GMOs. However, we enter a dangerous place when we lose confidence in scientific experts, the people most qualified to pronounce on the safety of GMO/GMF and the people who have guided us so reliably since Copernicus placed the sun at the centre of the solar system.