History of Science Museums, Europe and the US

Why not enhance your summer travels with a visit to a history of science museum? Last month’s column had suggestions in Ireland and Britain. What follows are a few ideas for Europe and the US 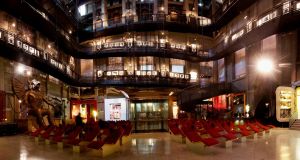 I think this may be my favourite museum ever. Housed in a former synagogue, the museum contains sections on the history of the moving image and the history of photography and then much more relating to the history of specific films and genres of film. The current exhibition is on animals in film.

The history section allows you to look at a wide array of optical devices covering over 200 years. This is your opportunity to see how those much-advertised magic lanterns and panorama shows of the 18th and 19th centuries actually worked. My children (4 and 9 at the time) were happily occupied for over an hour and I would have stayed for three.

You can also ascend the lift to a balcony giving you a view over the whole city and the surrounding countryside (extra charge). Closed Tuesdays but open Monday, Wednesday, Thursday, Friday and Sunday 9am to 8pm and Saturday 9am to 11pm. Tickets €10 (adult), €8 (concession) and €3 (6-18 years).

The museum has several rooms that focus on the sciences of most interest to Galileo, including astronomy and motion. They even have two of Galileo’s telescopes and a collection of objects from his patrons, the Medici. However, the collection is much more than this, including a celestial globe of medieval origin, planetariums showing a geocentric model of the universe, Robert Dudley’s navigation instruments and various apparatus for doing science displays in the Enlightenment salon. There is a special exhibition on the use of photography in science. Open Monday, Wednesday, Thursday, Friday, Saturday and Sunday 9:30am to 6pm and Tuesdays 9:30am to 1pm. Tickets €9 (adult), €5.50 (ages 6-15) or €22 (family of 4).

Housed in a medieval building that was formerly a leper house, a plague house and an asylum, this museum (like the Bethlem Museum of the Mind) explores both the history of mental illness and its treatment. The museum also looks at the connection between artists and mental illness. Exhibits are interactive and aim to give a sense of the experience of mental illness. (Thanks to Aida Keane for this suggestion.) Closed Mondays. Open Tuesday, Wednesday, Thursday, and Friday 10am to 5pm and Saturday and Sunday 12pm to 5pm. Tickets from €7.50 to €10.

This museum is outside of Barcelona so will require use of public transport. Recommended by fellow historian of science and Barcelona resident Oliver Hochadel, the collections are housed in an industrial building and cover a wide range from the history of medicine to the history of household technologies. Highlights include an exhibition on the history of computing and one on the technology of textile production. The museum is currently hosting an exhibition of inventions by Leonardo da Vinci. Open limited hours during the summer, Tuesday to Sunday 10am to 4.30pm. Tickets €4.50 (adults) and €3.50 (concession).

Although I love the Smithsonian Institute and the Natural History Museum, this is by far my favourite museum in the US capital. Perhaps some will find the celebratory tone a bit too much, but it is hard not to be awed when within a few steps of the entrance you can see Charles Lindbergh’s Spirit of St Louis and get up close to two space capsules. The museum’s website is also excellent if you are interested in the history of aviation and space exploration but won’t be in the area. Open every day, 10am to 530pm, extended until 7:30pm during much of the summer. Admission is free.

Download an Edinburgh tour focused on the history of science at curiousedinburgh.org or check out one of the city’s many anatomical museums; the Bakken Museum in Minneapolis, Minnesota, is devoted to the history of electricity; the Boston Museum of Science currently hosts an exhibition on the history of combatting disease; the Harvard Museum of Natural History in Cambridge, Massachusetts, is home to historic collections including the amazing Blaschka glass models of sea creatures created in the 19th century.