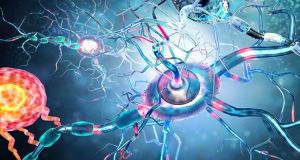 A file image of nerve cells, which are affected by Huntington’s disease.

Researchers at NUI Galway have discovered what they say are encouraging early signs for a potential treatment for Huntington’s disease.

Huntington’s is an inherited neurodegenerative disease that causes serious cognitive and movement defects.

Sometimes called Huntington’s chorea, it is “debilitating, untreatable and relentlessly fatal”, according to the researchers.

Prof Robert Lahue and his team at the Centre for Chromosome Biology and the Galway Neuroscience Centre at NUI Galway collaborated with scientists at the University of Barcelona.

They targeted an enzyme called histone deacetylase 3 (HDAC3), which is thought to alter important biochemical mechanisms in the brain of Huntington’s disease patients and thereby accelerate disease progression.

The study published on Thursday in the journal Scientific Reports shows that blocking HDAC3 with an experimental compound in a pre-clinical model of Huntington’s disease slows cognitive decline and delays the onset of molecular signs of neurodegeneration.

While these results are preliminary, the data shows that the onset of Huntington’s disease is delayed when HDAC3 is blocked in this pre-clinical setting. This is an encouraging first step because currently there are no effective treatments that target the root cause of the disease,” Prof Lahue said.

Prof Lahue noted the key role of the Spanish collaborators and co-authors, Dr Silvia Ginés and Nuria Suelves from the University of Barcelona.

Prof Lahue and Dr Ginés have applied for additional funding to develop the treatment further and to assess additional safety aspects.

The Huntington’s Disease Association of Ireland estimates, based on research in Northern Ireland and a population of 4.67 million in 2011, that there are about 500 people here with the condition and a further 2,500 at risk.

While Huntington’s disease is relatively rare, over 9,000 family members in Ireland may require support and information, according to the organisation.

Huntington’s Disease is a genetic condition with each child of an affected parent having a 50 per cent likelihood of inheriting the gene.

Both men and women have equal chances of being affected and most people develop the symptoms between the ages of 30 and 50. About 5-10 per cent of people have onset of symptoms before the age of 20 and 10 per cent after the age of 60.

The average survival time after diagnosis is about 15-20 years, but some people have lived 30 or 40 years with the condition.