Why farmers and ecologists should be friends

Our challenge is to increase quantity and quality of food production while ensuring farmers can make a living, without trashing ecosystems 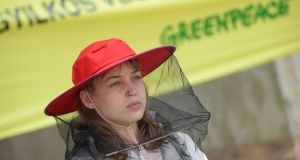 A Greenpeace supporter wearing protective clothing protests against bee-killer pesticides in front of the building of the Hungarian Ministry of Agriculture in Budapest on July 11th. Photograph: Attila Kisbenedek/AFP/Getty Images

Everybody loves a bargain. It’s true. We want that buzz of “value” – the lowest price, the buy-one-get-one-free, the 50 per cent off discount – that makes us feel like we’ve achieved something. I know I do. And, when faced with a multitude of choices on supermarket shelves, price can be the easiest and most satisfying way to make a decision.

Economics tells us that price is a function of supply and demand and, in relative terms, food has never been cheaper than it is today. But ecology tells us that the real cost of food production isn’t properly reflected in the price. We need nature to grow food, but the way we are doing it across much of the world – with large areas of land devoted to single crop types and high inputs of chemicals – is killing nature. Call it a market failure, call it an externality, call it a tragedy, call it a really stupid idea. It’s all of those things.

Economics and ecology share a common interest in our planetary “home”: eco is derived from the Greek word “oikos” meaning home, “logy” refers to the study of it, while “nomics” refers to its management. So economics and ecology are siblings, they should go hand in hand. Except they don’t. Here’s an example: when you buy a bag of apples, the price you’re paying covers commodities like the apple trees themselves, chemicals, machinery, electricity to manufacture the packaging, transport fuel to get it to the shop, and services like the farmer’s labour. But this misses a huge chunk of the inputs required for a good harvest.

As regular readers of this column will know, I’m a pollination ecologist, which means that I study bees and other insects which pollinate flowers so that they produce fruit. And we need pollinators for a whole host of foodstuffs, especially the most delicious ones: strawberries, coffee, chocolate, tomatoes, apples, etc. A decade ago, the world was just starting to hear about Colony Collapse Disorder (CCD) and sudden, dramatic, unexplained deaths of honeybee colonies across North America. At the same time, wild bees were also in trouble. Was it disease? Or something else? Some people suggested it was down to pesticides. The idea didn’t catch on at first: we had always been using pesticides, nothing had really changed, had it?

But things had changed: in the early 1990s we started using a new type of insecticide – the neonicotinoids. They were hailed as a revolution in pest control because seeds for cereals and other field crops were coated in the stuff, which meant that we didn’t need to spray the land in order to prevent crop loss to pests and ensure good yields, and ultimately cheap food. This was thought to be better for the environment. But with the good old Law of Unintended Consequences – they were having more insidious effects.

Neonicotinoids (or “neonics”) are nerve poisons: they target the insect nervous system and stop it from working properly. They’re used in a prophylactic way – like a vaccine – rather than to manage outbreaks of pests, so they’re actually in the entire plant rather than just sprayed on top of it. They find their way into wild plants, drainage ditches, ponds and rivers, where they poison a huge variety of wild insects including bees, killing them, impairing their ability to reproduce, and confusing them so they can’t find their way home. Last month, the results of the largest field experiment ever conducted were published, backing up laboratory studies that showed neonics have detrimental impacts on different bee species.

Now, people are calling for a complete ban on neonics. I agree with this in principle, but the problem is, if we ban them, what will replace them? We still need to control crop pests, we still want cheap food, there are many other factors affecting bee health, and the alternatives to neonics may be even more damaging.

If you ask me, the real challenge is to increase the quantity and quality of food production while ensuring farmers can make a living, but without trashing ecosystems. Part of this rests with politics: agriculture and the environment are dealt with separately by governments, and yet they are two sides of the same coin.

But a bigger part rests with economics: nature has been quietly picking up the bill for the real cost of production, but it can only bail us out for so long. It has limits, “tipping points” that are impossible to reverse once they’ve been crossed. Investing in nature and increasing its value so that we can continue to reap the dividend over generations is magnitudes more cost-effective than destroying it in the short term for convenient profit. The current approach to food production might be cheaper for you and me, but is it a price worth paying?

Call for the protection of midwifery-led maternity units 18:29
Brinks Cash Services to close three branches, with 160 jobs at risk 18:24
Penneys announces it will reopen Irish stores next week 18:09
Hundreds protest outside US embassy in Dublin over George Floyd death 17:59
Nine more deaths from Covid-19 recorded in Ireland along with 24 new cases 17:44