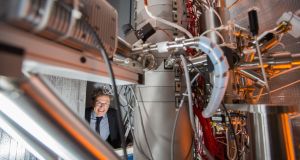 Prof Mick Morris: ‘there’s a whole family of 2-D materials out there’

Ever since the first elements were identified, scientists have been on a quest to create the ultimate wonder material, stronger, lighter, more flexible and most importantly cheaper than what’s come before. Over the past 100 years, the public has eagerly embraced such cool stuff as Bakelite, nylon, Teflon, fibreglass and carbon fibre, making them a part of their everyday lives – and making a number of people rich in the process.

Now the big wonder material everyone’s talking about is graphene. The world’s first 2-D material, it’s the thinnest material known to science, just one atom thick. It’s ultra-light and almost completely transparent, but also very strong, almost 200 times stronger than steel. It’s a superb conductor – hence its potential use in computers, smartphones and sensors – and is a very effective barrier, not even helium can pass through it, which makes it a potential game-changer in the realm of water filtration and purification.

“It’s like a platelet – very flat, like a plate that is essentially one atom thick,” says Prof Mick Morris, the Director of Amber, the materials science centre based at Trinity College Dublin. “You know graphite, with its hexagonal structure, is like a beehive. Well, this is a slice down the beehive, so you still get the hexagons, but the hexagons are only one atom thick.

It’s like when you get a telephone book and try to rip it, it’s impossible

“It’s made of carbon, and so it’s phenomenally strong. If you think about basic material science, and you think about the mechanisms for the way things break – they break because of defects that are in them. So it’s like when you get a telephone book and try to rip it, it’s impossible. But if you cut it first, it rips quite easily. And graphene doesn’t have any of those defects. It’s crystallographically perfect. The other thing that’s nice about it compared to many materials is that it’s completely natural.”

If you’ve ever used a pencil, you’ve probably accidentally made graphene yourself, but it was first isolated from graphite in 2004 by Prof Andre Geim and Prof Kostya Novoselov, two researchers at the University of Manchester, who basically used sticky tape to peel off one-atom-thick flakes of graphene from a piece of bulk graphite. Six years later, Gein and Novoselov were awarded the Nobel Prize in physics, so don’t underestimate the power of a simple roll of Sellotape. Mind you, they also did some complex stuff too, such as making the first observation of the anomalous quantum Hall effect in graphene, and finding evidence of Dirac fermions, so that award wasn’t just tacked on.

If the hype is to be believed, graphene is set to revolutionise every aspect of our lives, from computer screens to smartphones to medical devices to even clothing. No wonder universities – and entrepreneurs – around the world want a piece of this wonder stuff. We’ve been promised jetpacks before, so we’ve learnt to take the hype with a pinch of powdered graphite, but now the heat is on to turn graphene research into gold by developing graphene-based products that people will pay top dollar to own.

At Amber, groundbreaking graphene research is being done by a team led by Prof Jonathan Coleman, who took Prof Geim’s and Prof Novoselov’s sticky tape method up a notch by essentially making graphene in a Moulinex.

“He took graphite, powdered it up in a mill, put it into a soapy solution, and just used a standard kitchen blender,” says Prof Morris. “It sounds ludicrously simple, I know, but it is slightly more subtle than that, in that when you use the soap, you balance the surface energies to make it, and then, the way the mixer works is, it has to have shear force, so it has to drag the sheets apart.”

No one is going to get rich sitting up all night making graphene with sticky tape or in a kitchen blender, which is why Amber and the University of Manchester both work closely with industry to figure out how to scale the manufacture of graphene, and how to incorporate graphene into products to make them stronger, more durable, more flexible and more efficient. You can’t just shape graphene like a metal, says Prof Morris, because it will lose its amazing properties and go back to being plain old graphite. So you have to blend it into a polymer which can then be shaped into a 3-D object.

“The number of uses it might have are phenomenal, but again it’s going to be ‘can you make it/’, ‘will it be cost-competitive?’,” says Prof Morris. “You can use it to make the most fantastic things, but will you pay for them? So that’s why I think the work we’ve done here to make it in an effective, facile, and low-cost method is a major breakthrough.

“That’s essentially what Amber does. We don’t look at how to make something which looks nice in a paper. We work on how to turn that into a product that eventually someone will buy. And either through the preparation of graphene, or licensing the materials or by creating spin-outs, whatever is appropriate, we try to push it into products. And it can take a long time. I used to work for ICI, and we were generally told that if you invent something, it would be 25 years before you would see a monetary return. And by and large those rules haven’t changed. So anything that researchers and research centres can do to accelerate that just brings the profit earlier.”

The university works closely with large companies and SMEs to develop uses for graphene in such areas as energy, membranes, composites and coatings, biomedical devices, sensors and electronics. The university recently held its annual industry day, where it showcased the properties of graphene to a large number of companies, and recently held a successful public exhibition telling the story of graphene.

It’s not just blind faith that’s driving the researchers and companies on, says Baker. Graphene really does live up to its hype, he reckons, and in the 13 years since it was first isolated, it’s already well ahead of schedule in permeating our daily lives.

“I’m cautious about calling it a revolution, but in the same way we saw carbon fibre being used in everyday objects, we’re going to see graphene being used in tyres, kitchen utensils, tennis racquets, fishing rods. We’ll see it in batteries, to make them longer-lasting and faster-charging – imagine being able to charge up your mobile phone in 10 minutes.”

Scientists won’t hazard a guess as to how much the graphene industry could be worth, but Baker points out that, in the aerospace industry alone, graphene could generate revenues in the tens of billions.

For bodies such as Amber and the University of Manchester, there’s a tangible return on research. For every graphene-based product that goes to market, the academic institute behind it receives a royalty that goes back into funding research and producing top-class graduates who go on to top jobs in industry. It’s a win-win situation – as long as graphene delivers on its promise.

It costs more than a few rolls of sticky tape or a bunch of kitchen appliances to do the necessary research into graphene. Amber is co-funded by Science Foundation Ireland and by industry, and works not only in 2-D materials, but is also a pioneer in nanomaterials.

“We’ve just put in an application for more funding and it’ll be a €40 million project for the six years of its next stage,” says Prof Morris. “So it’s a big investment, but I think we return that investment to the State, in terms of the technology we produce, the graduates we produce, the researchers that go into Irish industry, the licensing that we do, everything across the board from bioengineering to bioelectronics. I think the country gets a really good return on that investment.”

Panel: Brewing up a storm

It’s not just graphene – there’s a whole family of 2-D materials out there, each an analog of graphene, and each with unique and useful properties of its own, says Prof Mick Morris, head of Amber at Trinity College Dublin.

The team . . . has been working with the beer brewing company SABMiller to create a lightweight alternative to glass bottles

“For instance, Molybdenum sulphide has really very good semiconductor properties, so for certain applications, it might be actually better than silicon,” says Prof Morris. “And Boron nitride is very ceramic, it’s got no metallic properties, but it’s a very good barrier against air.”

The team at Amber, led by Prof Jonathan Coleman, has been working with the beer brewing company SABMiller to create a lightweight alternative to glass bottles for storing beer.

“One of the problems with bottled beer is that the glass weighs a phenomenal amount. If you could store beer in a polymer, which is lighter, the transport costs will go down, but you can’t store it in polymer because the air comes through and destroys the taste. But by putting boron nitride in it, which stops that permeation of air, you can swap out glass for polymer.”

If anyone can think of a better use for graphene, I’ll buy them a drink.