Anti-vaccine sentiment will not be easily eradicated 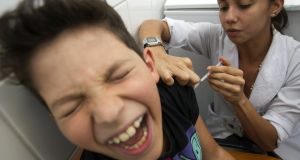 A child is vaccinated against yellow fever in a hospital in Brasilia, Brazil. So far this year, Brazil has had 234 confirmed cases of yellow fever and 79 deaths from the mosquito-borne disease. Photograph: Joedson Alves/EPA

A general scepticism about science has pervaded Donald Trump’s rhetoric throughout his campaign and since he took office. This scepticism has been reflected in his appointments. In case you missed it, Trump appointed someone to head the Environmental Protection Agency who not only does not support the agency but has brought lawsuits against it. Pages on climate change were removed from the agency’s website.

Trump has also vowed to pursue vaccine safety concerns that most scientists consider discredited. To lead this investigation he has appointed a vaccine sceptic (Robert F Kennedy jnr). Ireland has had its own debates over vaccine safety, most recently focused on the new vaccine for HPV.

But vaccinations attracted controversy almost from their inception. The first vaccination that was widely used was one against smallpox. Edward Jenner developed vaccination based on a related virus (cowpox) in 1796. Long before Jenner’s vaccine, many cultures had a folk practice of inoculation. While vaccination did not give you smallpox, inoculation was intended to give you a mild dose of smallpox. An inoculator intentionally infected children with smallpox from another child that appeared to be experiencing a mild form of the disease. A mild case of smallpox provided protection from future infection with smallpox that might be more severe.

Smallpox was an endemic disease of childhood in the 19th century, and severe outbreaks could cause many deaths. In Ireland, free vaccination against smallpox was made widely available in 1851. Provision was through the poor law unions who administered dispensaries across the country. This measure had only limited success, probably because doctors were not paid for vaccinations and because the practice of inoculation was still common in many rural areas.

A series of reforms to the provisions eventually resulted in compulsory vaccination from 1863. Parents were given a period of six months within which to vaccinate a newborn child. Failure to vaccinate could result in a fine of 10 shillings. Doctors were also paid for each person they successfully vaccinated. This compulsion was further strengthened in 1879 by increasing the fine to 20 shillings.

What did not develop in Ireland but did develop in England and America (which also introduced compulsory vaccination in the 19th century) was a high-profile movement against vaccination. The main arguments put forward in this debate will sound familiar to anyone who has followed recent vaccine controversies.

Opponents of vaccination objected on the basis of liberty and the grounds of safety. The anti-vaccination movement involved two groups who were either new to or desirous of obtaining the franchise: the working classes and women. For each of these groups, the sanctity of the family was being violated by the imposition of compulsory vaccination. The state, which was supposed to protect the rights of the individual, was trampling on them in the manner of a tyrannical or despotic government.

The smallpox vaccine is in fact a roaring scientific success story. Smallpox is effectively extinct as a disease and lives only in guarded laboratory freezers. But in the same way that shouting down or belittling the anti-vaccinationists was ineffective in the 19th century, it will be ineffective now. If you are interested in a different type of campaign to promote vaccination check out #vaccineswork.