It’s as easy as pi

That’s Maths: The computation of ever more accurate estimates of pi has preoccupied enthusiasts for centuries 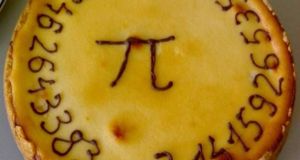 It’s a piece of cake: One way to remember the value of pi is by means of a ‘piem’, a poem whose words have letters corresponding to the digits of pi

Every circle has the property that the distance around it is just over three times the distance across. This has been known since the earliest times. The constant ratio of the circumference to the diameter, denoted by the Greek letter pi, is familiar to every school child. You might expect to find a proof in Euclid’s Elements of Geometry, but a search there would be in vain. Euclid could not include the result as a theorem since, with the axioms or assumptions that he used, he could not prove it, and he made no mention of the ratio.

Archimedes of Syracuse, who lived a few generations after Euclid, determined pi accurately by considering polygons inscribed within a circle and polygons surrounding it. It is easily shown that a regular hexagon – a polygon with six equal sides – fitting snugly within a circle of unit diameter, has length 3. But it is clear that the perimeter of the hexagon is shorter than the circumference of the circle, so pi is greater than 3, the value implied by a passage in the Bible (1 Kings 7:23).

A less obvious derivation shows that a hexagon drawn around the circle has length twice the square root of 3 or about 3.46, so pi is less than this value. To prove this, Archimedes had to introduce additional axioms. He then doubled the number of sides four times, ending up with polygons having 96 sides. These were very close to the circle, allowing him to get a much more precise estimate of pi, between 223/71 and 22/7 or 3.141 and 3.143 which was remarkable given the limitations of the Greek system of numerals.

Archimedes’ estimate was not bettered for centuries. However, the ratio 355/113, which gives pi correct to seven figures, was known to the Chinese mathematician and astronomer Zu Chongzhi in the fifth century AD. It is easily remembered: write 1 1 3 3 5 5, and divide the last three digits by the first three.

The use of the letter pi for the ratio was popularised by the great Swiss mathematician Leonard Euler. The usual approximate value 22/7 is a “rational number”, the ratio of two whole numbers, but pi is irrational: it cannot be expressed exactly as such a ratio and its decimal expansion, starting 3.14159 . . . , continues eternally without repetition. The computation of ever more accurate estimates of pi has preoccupied enthusiasts for centuries.

Isaac Newton computed 15 digits by adding many terms of an infinite series. There are numerous series and products for computing pi but, because of its irrationality, all involve an infinite number of terms. Early in the 20th century, the Indian mathematician Srinivasa Ramanujan found many new elegant expressions for pi. The current record for computing the ratio is more than 22 trillion digits; that is, 22 followed by 12 zeros!

A delightful and simple way to remember the value of pi is by means of a “piem”, a poem whose words have letters corresponding to the digits of pi. The English physicist James Jeans wrote this piem: “How I want a drink, alcoholic of course, after the heavy lectures involving quantum mechanics. Counting the letters in each word, you can write 3.1415 92653 58979, giving 15 digits of pi, more than you are ever likely to need.”