A slice of death: changing attitudes to putting corpses on display 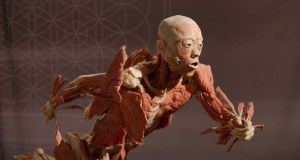 The Real Bodies exhibition in Dublin arrived two months ago with little controversy, the way having been paved more than a decade past by the flamboyant figure of Gunther von Hagens, a German anatomist. Von Hagens invented a means of preserving bodies through “plastination”, which he used to create the exhibition Body Worlds. Von Hagens sees himself as an educator and a promoter of “public anatomy”. He has even performed autopsies live on television. Through his website you can apply to donate your body for plastination, and he has brought the technique to “400 plastination laboratories in 40 countries”. His many imitators (including the Real Bodies exhibition) have also promoted themselves as sights of science and health education.

There is a long history to the relationship between anatomy, medicine and the public. Although human dissection for scientific and medical purposes has probably been going on since ancient times, the practice became much more common and much more public in Europe from the 14th century. During the 16th century, many universities built anatomy theatres to facilitate viewing of dissections. The intended audience was mostly medical students but often included members of the public. Public interest was particularly high when the body dissected (usually a criminal) had attained some notoriety during life.

The University of Padua had probably the most prestigious medical faculty in Europe during the 16th century. One reason for its prestige was an increased emphasis on practical teaching of students rather than simply book learning. Public dissections had long been available to students but were often performed not by higher-status physicians but by lower barber surgeons. While employed there, the physician and anatomist Andreas Vesalius (1514-1564) began performing public dissections himself to make them – or so he claimed – more educational.

Vesalius faced a number of obstacles to creating a good public dissection. Perhaps most important was the difficulty of obtaining a suitable corpse. Corpses for dissection were almost universally the bodies of criminals who had been executed. For public dissection, what was wanted was a typical specimen that would illustrate the expected structures of the healthy body. Parts of the body were often damaged by execution (death by hanging destroyed the larynx) or had begun to decay by the time they were reached in a multi-day dissection. A single corpse was not sufficient for showing sex differences. According to historian R Allen Shotwell, Vesalius made up for some of these problems by employing animals alongside human corpses and creating illustrations from previous dissections.

Vesalius’s famous seven-volume text on the human body was the result of many years of dissections, predominantly private ones for his own study. De Humani Corporis Fabrica (On the Fabric of the Human Body), published in 1543, became an instant classic and eclipsed all that had come before it. Although it has been superseded in the centuries since, its illustrations still have the power to awe. Influenced by Renaissance art and executed with incredible skill, they are beautiful to behold. You can see them in one of many digitised versions of the text created to mark the 500th anniversary of his birth, such as the one available at the British Library website, bl.uk/turning-the-pages.

Any controversy there has been over Real Bodies has centred on whether those exhibited had willingly donated their bodies. The same controversy followed von Hagens’s Body Worlds. In both cases there was some evidence that not all bodies were obtained by consent. Both exhibitions have been accused of using the bodies of Chinese criminals in a striking parallel to their 16th-century predecessors. The debate over the modern exhibitions generally ignores the continued display of millions of human body parts in anatomical museums across the world. Most of these parts were not acquired in ways that we could consider ethical at the present time. The museums were developed as research and teaching collections but were also often open to the public as education/spectacle. The most famous example is probably the Hunterian Museum in Glasgow, originally assembled by the anatomist William Hunter during the 18th century.

Do we still need the display of human remains to help the public understand the human body? The allure of these exhibitions is that they are real bodies rather than models, something that smacks a bit more of sensation than education.