That’s Maths: It can be argued that there is a close relationship between his turbulent state of mind and the turbulent atmosphere evident in his work 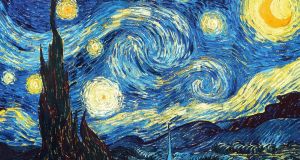 ‘Starry Night’: it seems probable that Van Gogh was gifted with a profound intuitive feeling for turbulence and that this is reflected in his paintings.

We are all familiar with the measurement of speed, the distance travelled in a given time. Allowing for the direction as well as the magnitude of movement, we get velocity, a vector quantity. In the flow of a viscous fluid, such as treacle pouring off a spoon, the velocity is smooth and steady. Such flow is called laminar, and variations of velocity from place to place are small.

By contrast, the motion of the atmosphere, a fluid with low viscosity, can be irregular and rapidly fluctuating. We experience this when out and about on a gusty day. Such chaotic fluid flow is called turbulence, and this topic continues to challenge the most brilliant scientists.

The English Quaker mathematician, Lewis Fry Richardson, who was an expert on turbulent motion, encapsulated the essence of turbulence in a delightful couplet: “Big whirls have little whirls that feed on their velocity / And little whirls have lesser whirls, and so on to viscosity.” The idea is that energy from the sun enters the atmosphere at large scales and is transferred through fluid interactions to smaller scales where it is dissipated through viscosity or fluid friction. This process is called an energy cascade.

At the time he painted Starry Night, Van Gogh was emotionally unstable

The irregularity of air flow is such that it caused Richardson to pose an extraordinary question: “Does the wind possess a velocity?” He examined this issue and concluded thus: “the question, at first sight foolish, improves on acquaintance”. Richardson considered the way the velocity varies from place to place. This can be characterised by calculating a quantity called the correlation function. Richardson was able to derive what is called a scaling law, showing how average differences in velocity depend on the distance separating two points.

Richardson’s law was based on a wide range of observations, but it did not have a firm theoretical footing. The result was extended and made sharper in 1941 by the Russian physicist Andrey Kolmogorov, who established his “five-thirds power law” for the energy spectrum of turbulent motion. This law tells us what fraction of the energy of motion is contained in eddies of different scales. It has been observed to hold in a wide variety of fluid motions.

A few years ago, a team of physicists at the University of Mexico discovered a mathematical structure hidden in several of Vincent Van Gogh’s paintings. They studied the way in which the luminosity, or brightness, varies from point to point in the paintings. This is closely analogous to the way that turbulence is studied by comparing the fluid velocities at two points separated by a small distance. They found that the distribution of luminosity follows a five-thirds scaling law, just like Kolmogorov’s law. This pattern was particularly striking in Starry Night.

At the time he painted Starry Night, Van Gogh was emotionally unstable. It can be argued that there is a close relationship between his turbulent state of mind and the turbulent atmosphere evident in his work. In the periods when he was suffering severe mental turmoil, his paintings had a chaotic quality.

Perhaps the patterns of luminance in Starry Night are coincidental, but it seems more probable that Van Gogh was gifted with a profound intuitive feeling for turbulence and that this is reflected in his paintings. It is not impossible that at some future date psychologists may be able to use quantitative measurements derived from art works, relating them directly to patterns in brain waves so as to reveal aspects of the artist’s mental state.

Peter Lynch is emeritus professor at the School of Mathematics & Statistics, University College Dublin – he blogs at thatsmaths.com