For all his experience of environmental disasters, expert Terry Garcia is optimistic 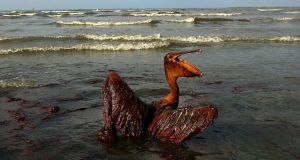 Pelican coated in heavy oil wallows in the surf in 2010 on East Grand Terre Island, Louisiana, after the Deepwater Horizon oil spill in the Gulf of Mexico. Photograph: Win McNamee/Getty Images 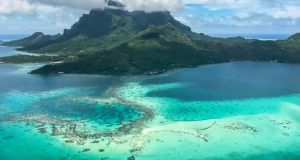 Few people say “no” to the White House, but when Terry Garcia received a phone call from the Obama administration in May, 2010, the request was not one that filled him with great joy. A series of explosions and firestorm the previous month had sunk the BP Deepwater Horizon drilling rig off the Gulf of Mexico, killing 11 people and injuring 17. The fireball could be seen for 64km or 40 miles.

The Macondo prospect was still gushing uncontrollably, and the finest brains in the oil and gas industry couldn’t plug the well. It was to become the biggest environmental disaster of its kind, releasing some 4.9 million barrels of oil over a 176,100 square kilometre area. As he recalls, until it was sealed in mid-July, the well was releasing the equivalent of two Exxon Valdez tankers a week.

And Exxon Valdez – the oil tanker which hit Alaska’s Prince William Sound in March, 1989 – was something he knew a fair bit about. During his time with the US National Oceanic and Atmospheric Administration (NOAA) in the mid 1990s, he led implementation of the restoration plan for the devastated environment.

It was no easy task, for the crude oil spill of some 10.8 million US gallons was then the largest of its kind in volume in US waters. Prince William Sound could only be reached by helicopter, plane or boat, which proved challenging for effective response. Deepwater Horizon, which succeeded Exxon Valdez as the largest spill, was far more accessible, he points out.

“The Gulf of Mexico was ideal in that we had everything we needed, but we were still making decisions about something happening at 5,000ft below, and we had so little information about that deep-sea environment,” he says.

Garcia was a member of the presidential commission which was given just nine months to report, as one of a series of investigations. It was an “eye opener”, he recalls, not least because an incident of this magnitude is “systemic” and never has one cause. “And of course, we still have very limited knowledge, and of course it could happen all over again,” he says. “Like soldiers trained to fight for the last war, that is not necessarily the war of the future.”

Garcia is a frequent visitor to Ireland, and addressed the national “ocean wealth” conference hosted by the Marine Institute in NUI Galway earlier this month. As he reminded his audience, “we still know less about the underwater environment than we do about the dark side of the moon”.

The Arctic is his big concern, as US president Donald Trump signed executive orders in April which undo restrictions on drilling for hydrocarbons put in place during the Obama administration. The orders instruct the US Department of Interior to come up with a new development plan for all federal waters off US coasts.

“The lack of leadership by the current occupant of the US presidency shows a complete disdain for international law,” he says, referring also to US withdrawal from the Paris climate change agreement.

Melting ice caps due to climate change are opening up the Arctic for shipping, oil and gas extraction and fishing, and president Trump can only see opportunities for money and jobs. Garcia acknowledges that there is much expertise within the oil and gas industry, and deepwater drilling requires such precision and expertise that it is akin to “putting a man on the moon”.

“Still, if it took three months to plug Macondo with all that knowledge, imagine the impact of a blowout in the Arctic in winter with all the ice cover,” he says. “Shell wanted to drill an area of Alaska where the closest coastguard station and icebreaker was some 1,000 miles away. . .”

For all his experience of two of the world’s most serious oil spills, Garcia remains an optimist. The former law graduate, who is now head of the global consultancy firm Exploration Ventures, spent the first part of his working life in the US Department of Commerce and NOAA, where he was a deputy administrator and responsible for clean water legislation, among other initiatives. Moving to the National Geographic Society in 1999, he provided support and management for more than 400 scientific field research, conservation and exploration projects each year.

“Every one of the people we have funded and sent out has come back a conservationist,” he says, and that is his mission now. “We have done the unthinkable, with acidification of the ocean and the mantra that the solution to pollution is dilution is no longer true,”he says.

“We can’t afford to wait, even for the term of this US administration, and so it is going to be up to countries like Ireland, along with the private sector and civil society internationally, to provide leadership.”

Garcia believes a focus on further ocean exploration, on technology and on awareness and education are key. Remote sensing technology offers the promise of improved fisheries management and enforcement of marine protected areas, and could also aid in the battle against illegal fishing, he notes.

The science of genetics, more specifically “assisted evolution”, offers “intriguing possibilities”, he says, as scientists are experimenting with ways of accelerating the evolution of corals to help them withstand increased temperatures. He cites initiatives like the “Ocean Cleanup” project by a 22-year-old Dutchman, Boyan Slat, which has already raised more than $30 million (€26m) to implement a new technology which may reduce the size of the Pacific “garbage patch” by 50 per cent in five years.

“But we can’t rely on technology alone either. Every individual action counts, citizens need to be engaged, the private sector has to be involved. We can no longer rely on governments to get us out of this.”

When Terry Garcia took a trip lasting over two days from Tahiti to the Millennium Atoll in the Pacific, he could hardly believe his eyes. The indigo waters were as clear as fine glass, the uninhabited islands pristine.

The atoll is part of the Southern Line islands, belonging to Kiribati. Its government has taken a positive approach to protecting natural resources, but doesn’t have the financial or military resources to effectively protect the entire area, he notes.

“We need places like this, and the oceans around it, to be able to breathe as a species,” he says, but he firmly believes the 21st century will be a “new age of exploration” which will focus on “information rather than exploitation”.

“There is more human history sitting at the bottom of the ocean than in all the museums on land, but this is also a habitat for a million species carrying secrets to the inner workings of the planet,” he says. His eyes light up as he explains his belief that the deep ocean offers “keys to doors we have not opened, and doors we do not even know exist”.

He has three pieces of advice for the younger generation which has to inherit the legacy of Trump and company. “Get involved” as public opinion does make a difference, but also “seek out and try to understand other points of view”, and “avoid the temptation to limit your interactions with only those with whom you agree”.

“And consider becoming a scientist or explorer,” he says. “Even in this day and age, when it seems as if all the blank spaces on the maps have been filled in, there are still unseen wonders to be discovered and mysteries to be solved.”