Robert Murphy – ‘had a true genius for mathematical invention’

That’s Maths: He had become an accomplished mathematician by the age of 13 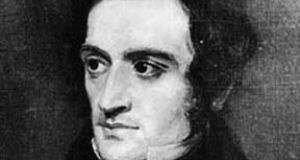 “A brilliant meteor that flared intensely but all too briefly”; this was how Des MacHale described the Cork-born mathematician Robert Murphy in his biography of George Boole, first professor of mathematics in Cork. Murphy was a strong influence on Boole, who quoted liberally from his publications.

Robert Murphy was born in Mallow in 1806, one of seven children of John and Margaret Murphy. When Robert was just seven years old, his father died and the family fell into poverty. Three years later he was laid up for a year following a cart accident. He learned mathematics during his convalescence, studying Euclid’s Elements and a textbook on algebra, as well as articles on astronomy, navigation and surveying, and he had become an accomplished mathematician by the age of 13. He came to the notice of a local schoolmaster who arranged for more formal schooling.

In 1823, Murphy applied to Trinity College Dublin but was refused admission. With no other opportunities in Ireland, he would have to look further afield. The following year, a Tipperary priest, John Mackey, published a pamphlet with putative solutions to the ancient problems of trisecting angles and duplicating the cube. Murphy examined Mackey’s work and found fatal errors. He published a Refutation, pointing out the shortcomings of Mackey’s proofs. It was a remarkably mature work for an 18 year old. As we now know, the two ancient problems cannot be solved within the limitations of Euclidean geometry.

With the publication of his Refutation, Murphy managed to gain admission to Gonville and Caius College. The people of Mallow were impressed with his mathematical abilities and raised funds for him to study in Cambridge. He started well in 1825, winning several awards and honours, and graduated in 1829 as third wrangler – third best in mathematics in the entire university. In May 1831, he was elected a Junior Dean, a well-paid position, with responsibility for discipline. The following year he became an MA.

Murphy wrote extensively on algebraic equations, definite integrals, differential equations and finite differences. This provided a vital framework for Boole’s work On a General Method in Analysis. Murphy’s work helped to trigger the flowering of research in abstract algebra. His mathematical works – about 22 papers and two books – were all of a high calibre.

In 1836, Murphy left Cambridge, with a wake of unpaid bills behind him. Two years later, with the help of his friend Augustus De Morgan, he found a position as Examiner at the University of London. After 1838, he produced little more; his disorganised and dissolute habits had resulted in deteriorating personal circumstances. He had become addicted to gambling – many of his bets are recorded in the Wager Book of Gonville and Caius College – and he also took to drinking heavily. His health deteriorated and he contracted tuberculosis, dying in London in 1843 and leaving much work uncompleted.

De Morgan wrote that Murphy “had a true genius for mathematical invention”. He produced some first class mathematics but little that is remembered today. While he was not a major mathematician, Murphy had remarkable mathematical talents and there was clearly much unrealised potential. As a working-class Irish boy raised in great poverty, Murphy was ill-equipped for the Cambridge milieu and his life was dogged by his dissipative habits. With a less chaotic lifestyle, he might have done much more of lasting importance.

Peter Lynch is emeritus professor at the School of Mathematics & Statistics, University College Dublin. He blogs at thatsmaths.com