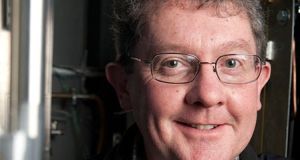 The search for the superconductor of the future has taken a significant step forward following a breakthrough by six research teams in the US and Europe led by an Irish quantum physicist.

A superconductor is a material that, under certain circumstances, behaves like a perfect conductor of electricity, offering no resistance whatsoever to the passage of electric current through it.

The new research, led by Prof Séamus Davis of Cornell University, provides evidence of how electrons combine in pairs at subatomic level in different superconductor materials – most notably in insulating copper-based compounds and metallic iron-based compounds already known to have superconductive attributes.

Details of the research are outlined in the latest issue of the journal Science.

“This realisation may broaden the search for new superconductors that can potentially operate under warmer conditions,” Prof Davis said.

Such “room-temperature superconductors” would be much more practical than existing superconductors for real-world, energy-saving applications, such as in power lines or energy-storage devices, he added.

The research was completed by Prof Davis during a six-month sabbatical at UCC’s Tyndall National Institute, which is a leading European research centre in integrated ICT hardware and systems.

A room-temperature superconductor is a material that would be capable of exhibiting superconductivity at operating temperatures above 0 degrees.

While this is not strictly “room temperature”, which would be approximately 20 to 25 degrees Celsius, this temperature can be reached and easily maintained in an everyday environment.

Up until recently, superconductivity was associated with much colder temperatures, often in highly-pressurised environments.

Prof Davis said the new research shows how radically-different materials “can develop the ability to carry electric current with no resistance at strikingly high temperatures”.

Understanding the new type of “orbital selective” pairing brings scientists closer to a “unifying concept” that would fully explain high-temperature superconductivity in a variety of materials, he said.

“The challenge is to find a way to see that some of the electrons are superconducting and some are insulating in the same crystal,” Prof Davis said.

The team’s achievement comes amid a growing realisation among scientists that the world will soon reach the limit of computing power attainable by conventional technology and that to progress further science will have to employ quantum technology.

Quantum computing takes advantage of the strange ability of subatomic particles to exist in more than one state at any given time. Due to the way the particles behave, quantum computing operations can be done much more quickly and use less energy than those on classical computers.

The functionality of a laptop or mobile hinges on their switching speeds, deployed with the benefit of the silicon chip.

But Prof Davis’s research means the prospect of room-temperature superconductors with switching speeds 10,000 times faster than existing rates is closer to realisation.

Such a development would mean a Netflix film could be downloaded in a second on a device that would not use any energy while doing so, and a battery might only need to be recharged once a year.

“This is the holy grail for people who work in my field,” Prof Davis told The Irish Times.

He had no doubt the room-temperature superconductor was attainable, as it was no longer “some mysterious challenge than cannot be solved”.

He said their research had shifted the science from theory to evidence. A room-temperature superconductor was now simply a matter of time, “and whoever solves it, and gets the patent, becomes a billionaire”.

However, he said that “discovery is my job” and it was up to others to bring the science to the stage of adoption in everyday technology. He noted that it took more than 50 years for silicon-based technology to have the impact it has had on our society today.

Prof Davis said he was very grateful to the Tyndall National Institute, adding that it provided the intellectual support, conducive environment and hospitality that enabled him to co-ordinate research taking place at six different locations across the world.

Further developments achieved by his group are contained in another research paper due to be published shortly by the journal Nature.

1 Swimming ban at Dublin's Merrion strand due to poor water quality
2 Coronavirus: What will reopen in Ireland’s phases to ease restrictions?
3 Coronavirus: No new Covid-19 deaths reported in State for first time since March
4 Next government could bring in work-from-home tax incentives – Taoiseach
5 Unconvincing account may take some heat out of Dominic Cummings controversy
Real news has value SUBSCRIBE

Why choose a business course? Creativity, teamwork alongside enterprise 00:00
CAO Q&A: Everything you need to know about the change of mind process 07:38
Man injured in Co Meath shooting attack last night 07:37
Third level gears up for blended learning 07:04
Swimming ban at Dublin's Merrion strand due to poor water quality 06:50