Bigger than the sun: ‘Red Supergiant’ star is 650 light years away 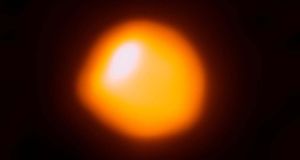 This orange blob shows the Betelgeuse star which has a radius about 1,400 times larger than the sun’s

An international team of scientists led by an Irish astronomer has made the most detailed image of the surface of a star other than the sun. The achievement was made possible by the use of the world’s largest radio telescope, which is based in Chile.

The image was taken of Betelgeuse, the famous “Red Supergiant” located in the constellation Orion, using the telescope known as ALMA (Atacama Large Millimeter/submillimeter Array).

According to Dr Eamon O’Gorman, Irish Research Council scholar and astronomer at the Dublin Institute for Advanced Studies, this could help explain how the atmosphere of these stars are heated, and how material they generate is transported to the instellar medium – the matter that exists in the space between the star systems in a galaxy.

“ALMA now provides us with the capabilities to image surface features on nearby stars while also directly measuring the temperature of these features,” he said.

“We have known for decades that the visible surface of Betelgeuse is not uniform, but ALMA has now shown us in detail that the temperature in its inner atmosphere is also not uniform. It looks like these temperature fluctuations could be caused by magnetic fields, similar to what we see on the sun, our nearest star.”

Next generation of stars

Another member of the team Dr Pierre Kervella, astronomer at the Paris Observatory, explained that Betelgeuse, located 650 light years away, “is certainly not the closest star to our solar system, but its sheer size makes it an ideal target to image directly with ALMA”.

He added: “When we look at the night sky with our naked eyes, we see bright stars everywhere, but because they are so small, even the most powerful telescopes in the world struggle to image their surfaces. Our results show ALMA has the capability to image the surfaces of the largest stars in detail.”

Betelgeuse is approximately 1,400 times larger than our sun, and more than one billion times larger in terms of volume. “As stars like Betelgeuse evolve, they expel an enormous amount of themselves back into the interstellar medium via stellar winds. These winds contain crucial heavy elements that the stars have manufactured and are vital ingredients for the next generation of stars and planets,” Dr O’Gorman said.

The team’s results have been published in the latest edition of the journal Astronomy & Astrophysics.

ALMA is a revolutionary instrument in its scientific concept, its engineering design, and its organisation as a global scientific endeavour. Since 2011, it has operated in the thin, dry air of northern Chile’s Atacama desert at an altitude of 5,000 meters above sea level. It has 66 gigantic 12m and 7m antennas working together.

Thanks to its high resolution and sensitivity, it is opening up a new “window” on the universe, allowing scientists to unravel longstanding and important astronomical mysteries, in search of our cosmic origins.

Radio telescopes study naturally-occurring radio light from stars, galaxies, black holes, and other astronomical objects and to transmit and reflect radio light off planetary bodies. They observe the longest wavelengths of light, ranging from 1 millimeter to more than 10m long. For comparison, visible light waves are only a few hundred nanometers long a nanometer is only 1/10,000th the thickness of a piece of paper.

Naturally-occurring radio waves are extremely weak by the time they reach earth from space. A cell phone signal is a billion billion times more powerful than the cosmic waves radio telescopes detect.