Greenland sharks beginning to shed their secrets on longevity

The sharks, which live up to 400 years, can be found off the northern coast of Ireland 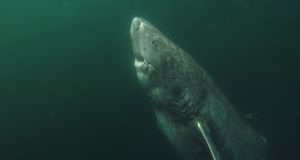 Greenland sharks, the longest living vertebrates on Earth, which can be found off the northern coast of Ireland, could hold the secret to long life, geneticists mapping their DNA have predicted.

The sharks, which live for up to 400 years, are believed to have unique genes that could help explain not only their remarkably long life span but also life expectancy in other vertebrates including humans.

With collaborators, Prof Praebel is searching for unique genes which could hold the secret to the shark’s longevity.

They have obtained Greenland shark DNA from tiny clippings from the fin of sharks, which are caught on a line live, tagged and released.

The team has sequenced the full mitochondrial genome (complete DNA information) of almost 100 Greenland sharks, which includes individuals born in the 1750s.

The genetic sequences have helped them understand whether the Greenland shark has evolved specific metabolic adaptations towards extreme longevity, he said.

Their research that suggested the sharks may be up to 400 years old was published in the leading journal Science last year. They are now attempting to find the genes that hold the secret to why the sharks live so long.

They believe the Greenland shark’s extreme life span makes it so unique that there is a case for giving it a special conservation status, he added.

“This is the longest living vertebrate on the planet. Together with colleagues in Denmark, Greenland, USA, and China, we are currently sequencing its whole nuclear genome which will help us discover why the Greenland shark not only lives longer than other shark species but other vertebrates,” he said. “The results will help us understand more about the biology of this elusive species.”

Its “long-life” genes could shed light on why all vertebrates have a limited life span, and what dictates the life expectancy of different species including humans, Prof Praebel told the Fisheries Society of the British Isles.

Greenland sharks do not seem to succumb to diseases that kill related species much earlier.

Little is known about the biology and genetics of the Greenland shark which is found in deep waters in the Atlantic ocean from Canada to Norway including north of Ireland and Britain. It is a member of the sleeper shark family that has existed for around 110 million years.

The oldest and largest Greenland shark at just over five meters analysed by the scientists was estimated to be 392 years, plus or minus 120 years, ie at least 272-years- old.

To determine when key indicator proteins were laid down, the scientists deployed radiocarbon dating – a method that relies on determining within a material the levels of a type of carbon, known as carbon-14, that undergoes radioactive decay over time.

The DNA study has shed new light on its behaviour, and how it is related to other members of its species living thousands of kilometres away, Prof Praebel added.

“Since the Greenland shark lives for hundreds of years, they also have enough time to migrate over long distances and our genetic results showed exactly that. Most of the individuals in our study were genetically similar to individuals caught thousands of kilometres away.”

It is still not known where and how the Greenland shark reproduces, but it may prefer to mate in “deep hidden fjords of the Arctic”. With adult female Greenland sharks known hit sexual maturity only once they reach more than four metres in length, the scientists found that females have to clock up an age of around 150 years before they can produce young.

Equally, there are still far from understanding how and why this elusive species, which feeds on seals and fish, lives so much longer than other sharks and vertebrate species. Other shark species living in the same regions as the Greenland shark live between 30 and 50 years.

Tissues, bones, and genetic data from the shark will also help measure the impact of climate change on the population, when and how contaminants and chemical pollution from industry began to affect the oceans, and the extent to which commercial fishing over hundreds of years has affected the shark population.

“The longest living vertebrate species on the planet has formed several populations in the Atlantic Ocean. This is important to know, so we can develop appropriate conservation actions,” he said.