Across the North Atlantic with the Go-Ship ocean survey 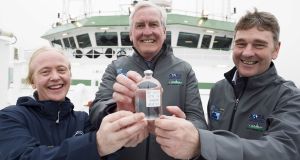 The Canadian Ambassador to Ireland, Kevin Vickers, is presented with a water sample from the deep ocean by Dr Caroline Cusack and Dr Peter Heffernan of the Marine Institute. Photograph: Andrew Downes 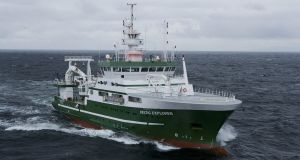 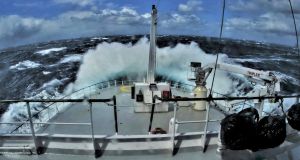 Stormy seas on the RV Celtic Explorer during the Go-Ship survey, which aimed to assess how the North Atlantic is changing in response to global warming. Photograph: Tomasz Szumski

Because our planet is changing at a pace more rapid than at any time in human history, continuous monitoring of our oceans is now an important endeavour.

In May, Ireland led an international transatlantic ocean survey with the Global Ocean Ship-based Hydrographic Investigations Program (Go-Ship). By measuring ocean properties down through all depths to the ocean floor, the expedition aimed to map an ocean transect (line) across the entire North Atlantic Ocean, between Ireland and Canada.

The survey, conducted on Ireland’s Celtic Explorer research vessel, was led by the Marine Institute in collaboration with NUI Galway. This was the first time that an Irish team has done so.

Dr Evin McGovern from the Marine Institute, who was the team’s principal investigator, explains that “although technology has provided many new methods to collect ocean measurements, with greatly improved coverage in space and time, ship-based research surveys are still the only way to collect the best-quality data.”

The team aimed to assess how the North Atlantic is changing in response to global warming, the process which is known to increase the amount of CO2 drawn down into the world’s oceans. Consequences have already been shown to be significant, including warming waters, ocean acidification and changing patterns of biodiversity, with wide-ranging ramifications for ocean life as well as marine-focused industries such as fishing.

“Go-Ship is a global programme that brings scientists together from around the world, to co-ordinate their efforts in collecting and sharing ocean data,” says McGovern. “A key aim is to carry out measurements through a network of 39 survey lines that criss-cross all of the world’s oceans, with the intention of repeating each line at least once per decade.”

On this survey the group have measured across the so-called A02 line, between Ireland and Newfoundland. It has been over 20 years since the line was last surveyed.

According to Dr Aggeliki Georgiopoulou, a lecturer at the School of Earth Sciences, University College Dublin, who was not involved in the survey, “the A02 line between the Irish shelf and Newfoundland will capture the characteristics of the water mass that keeps the Irish climate balmy. It is also in relative proximity to the Arctic Ocean and the Greenland ice cap, so it should help to identify the effect of the increased meltwater input from those locations.

“This data will then feed into understanding the water mass characteristics further south,” she adds. “Moreover, what is really important about these transects is that there is a plan to repeat them once every decade, which will help to reveal changes happening over time.”

According to McGovern, the team have been preparing this survey for a year and a half, building up an international partnership, and ensuring technical preparations are in place.

“While the Marine Institute and NUI Galway have expertise and experience in implementing similar surveys,” he says, “the scale of this one is much bigger, stretching our capacity, and Ireland could not undertake this without the support of international partners.”

As for the technical aspects, “measurements are achieved using sensors which are either mounted on the hull of the ship or deployed on a ‘CTD’ frame and lowered to the ocean bottom,” he says.

This ‘CTD’ frame is a unit which collects water at various depths, before being brought back on deck for further analysis. On the Go-Ship survey the team aimed to release and collect the CTD unit at 70 locations across the North Atlantic, gradually building up a picture of the ocean.

“In this way we will accurately measure ocean parameters including temperature, salinity, current speeds, and carbon dioxide levels,” says McGovern.

According to Dr Georgiopoulou, Ireland’s participation in this survey should not be underestimated. “The role that Ireland now plays in the Go-Ship survey is the fruit of ongoing investments, as research institutes turn to us not only to participate in these international programmes, but also to take the lead.”

Indeed, scientists from nine leading universities and research institutes are involved in the survey, representing six different countries on both sides of the Atlantic.

“This is a co-operation that will strengthen Ireland’s role in international oceanography,” says McGovern.

She predicts, and hopes, that such projects will happen more and more in the future.

May’s Go-Ship survey took place on board Ireland’s Celtic Explorer research vessel. The ship is one of two national research vessels owned by the State (the other being the smaller Celtic Voyager), both of which are operated by the Marine Institute.

Accommodating up to 35 personnel and 22 scientists, the vessel is kitted out with state-of-the-art technology, enabling a range of scientific tasks to be performed onboard. Such technologies includes a retractable drop keel for transducers and other instrumentation, and facilities to operate a range of remotely operated vehicles, ie submarine units, for exploring the ocean’s depths.

According to Dr Evin McGovern of the Marine Institute, “For the Go-Ship survey four containerised laboratories were fixed on the aft deck, and new sensors were installed and trialled at sea.”

But without proper preparation for onboard surveys, these technologies cannot be put to use. “If equipment breaks in the middle of the Atlantic Ocean, or if we forget something important, we can’t turn around and we can’t get deliveries,” explains McGovern.

“Overall, this requires a lot of good communication between the partners to ensure survey success.”

Conor Purcell is a science and nature writer with a PhD in Earth Science. He can be found on twitter @ConorPPurcell and some of his other articles at cppurcell.tumblr.com